Here’s a list of 5 scheduled application launcher software for Windows 10 which can be used to launch applications on a schedule. Say for example that you have a program that needs to be launched tomorrow, but you won’t be home tomorrow, behind the keyboard, to launch said program. An application launcher which can be set to launch applications at specific times will definitely come in handy in these types of situations. You can for example launch a web browser, and open a website, on a schedule. There are built-in Windows tools that let you do this, but it’s easier to do it with the software from the list down below. 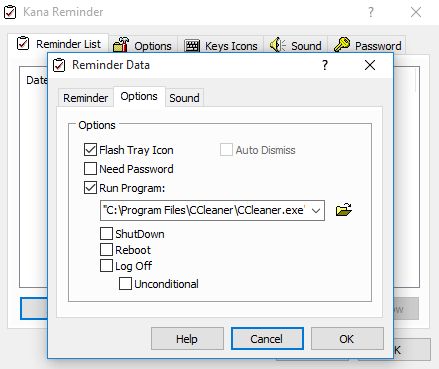 Kana Reminder is not a scheduled application launcher software per se. It is actually an application that you can use to setup reminders that go off at specific date and time. Next to system tray icon flashing, alarms and text notification pop-ups, you’ll also be able to setup application launches as “reminders”.

Other functionalities like PC shutdown, reboot and log off can also be scheduled, as you can see from the screenshot above. Another thing that you can see on the screenshot is that I’ve setup CCleaner to run on a schedule and it did. By default you’ll also hear an alarm, and there’s going to be system tray icon flashing, but these can be turned off if you’re only looking to use Kana Reminder to launch applications. To set schedule an application launch, first open up Kana Reminder. List of reminders is displayed by default but it’s empty. Click “Add reminder” button and then go under the “Options” tab to select the executable you want to launch. Quick and simple. 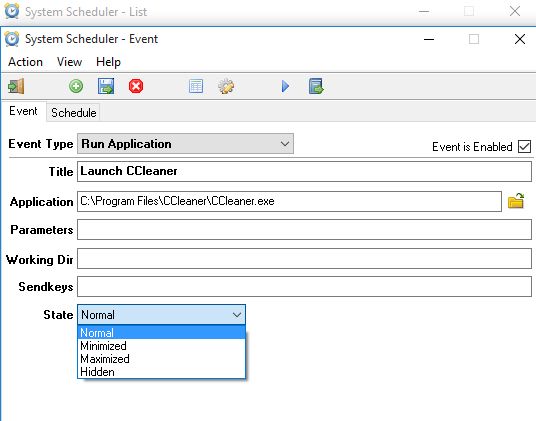 System Scheduler is similar to Kana Reminder, but it’s in reverse. Its main functionality is that of a scheduled application launcher software, but it can also be used to setup reminders that go off at specific time and date.

On the image above I’m setting up another scheduled launch of CCleaner. Notice that launch parameters, working directory and application state (normal, minimized, maximized, hidden) can be setup. Keyboard presses at launch can be also be passed to the application. System Scheduler lets you setup more advanced launch schedules. Application can be launched only once, every minute, hour, day, week, every x number of days, every month and lastly every year. Pretty much any kind of time/date combination can be setup.

Also, have a look at 5 Whois Checker Software For Windows 10. 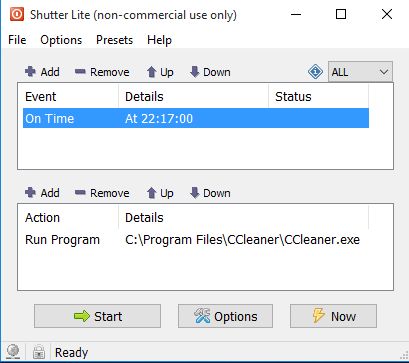 Shutter is a portable scheduled application launcher software that also has an installer version. Even though it’s small and has a simplistic interface, Shutter is packed with features.

Notice that the interface is divided up into 2 sections. Top section, the “Event” section, is where you’ll be setting the time/date when you want the application launched. Launching applications is called “Actions”, and it’s configured in the bottom section of the interface. Next to the aforementioned event/action combo (on time/run program) there are dozens of other events like countdown, CPU usage, network usage, low battery and actions like PC reboot, sleep, volume changes, etc. Note that the free version is limited to just 5 event/action combos. 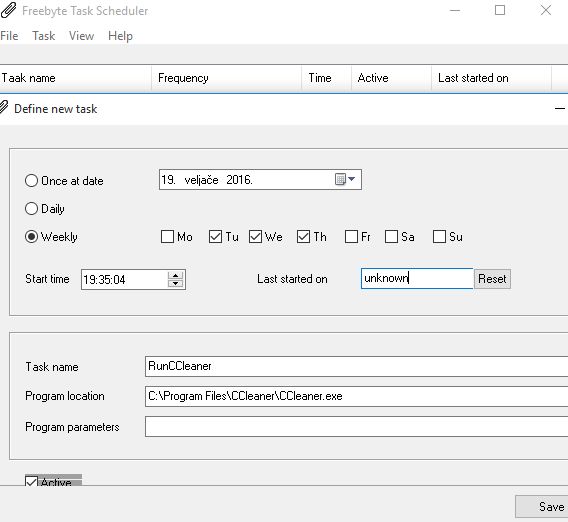 Freebyte Task Scheduler I like because of two things, it’s portable and it’s just a scheduled application launcher software for Windows 10, it doesn’t have any kind of other functionalities next to it, to confuse users.

Power users will definitely like the advanced functionalities offered by Shutter, for example, but novice users might be intimidated by them. Freebyte Task Scheduler is only an application launcher, which launches applications at specific time/date, nothing else. After launching the application you’ll see an empty list of tasks. To schedule an application launch click on the bottom left corner + button and follow instructions. Advanced schedules with daily/weekly repeats and custom launch parameters can be setup. Simple, portable and to the point.

Also, have a look at 4 Free Network Printer Scanner Software For Windows 10. 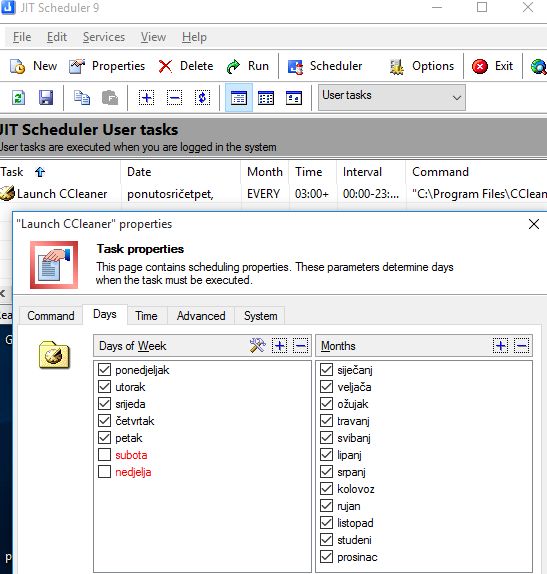 JIT Scheduler is very similar to System Scheduler when it comes to functionality. After installing and launching the application, you’ll see an empty list of tasks. Add new tasks and manage existing ones with the toolbar at the top.

Next to applications, you can also open files on a schedule, turn off the system or schedule message reminders. Advanced schedules with launches that repeat daily or weekly can be setup. Normal, minimized, maximized and hidden launch modes are available. Once that the applications are launched they can also be terminated after X amount of time has passed, or X number of launches. Multiple tasks can be setup and active at once (there’s a tasks list).

Out of the 5 scheduled application launcher software for Windows 10 from the list above I liked System Scheduler because it comes with lots of advanced features, which power users amongst you will like. Freebyte Task Scheduler on the other hand I like because it’s a simple and to the point application launcher. Let me know what you think by leaving a comment down below.