Here’s a list of 5 jokes apps for Android which you can use to enjoy jokes on your phone or tablet. Jokes are a great way how to cheer up when you’re feeling down, and also how to be the life of the party by making your friends laugh. Times are though and we can all use a few laughs to take our minds off of the fact that times are though. Those who have access to internet at all times, won’t have problems finding good jokes, but those who don’t can benefit a lot from a good jokes app. 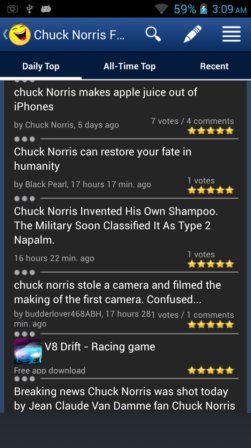 Funny Jokes is a great jokes app that unfortunately requires access to the internet in order to view all the countless thousands of jokes that the app offers. Funny Jokes actually gives you access to a large community of joke writers that post their own original material in one of the 20 different joke categories.

Available categories include Chuck Norris jokes, blond jokes, one lines, yo momma jokes, funny insults, redneck jokes, animal jokes, useless facts and more. You can also post jokes of your own and then read feedback on them from other users. 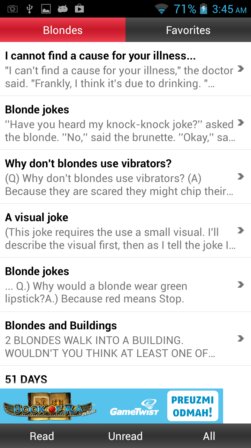 20000 Awesome Jokes can be used offline, in the situation described in the introduction, when no internet connection available. It comes with a database of 20000 jokes sorted into more than 40 categories.

Categories are basically the same as that of Funny Jokes. First you’re given a list of categories, and when you select one you’ll then be presented with a list of jokes within that category, list of their short descriptions. Tap on a joke to see it in full. 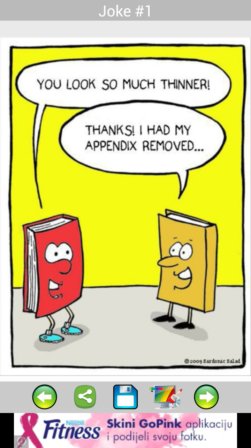 Picture Jokes is a jokes app that doesn’t do text, well it does, but it does it in the form of comics and other similar funny images.

This is also an offline app that comes with a database of funny image like the one that you can see on the image above. There are no categories. Use the directional keys at the bottom of the screen to switch between funny photos. Images that you find very funny can be shared via social networks or texts. 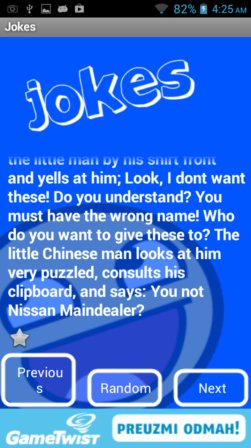 Jokes is a very simplified jokes app which doesn’t have categories, when you open up the “jokes” menu entry, a joke is opened up right away.

You use the navigational buttons down below to switch between jokes. There’s also a random button down below which is gonna randomly open up a joke for you. App is being updated with new jokes all the time, so there’s always something new to read and get a few laughs off.

Make sure to also have a look at Free Jokes app for Android: Jokes and SMS. 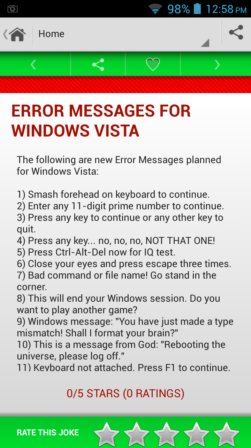 LMAO Jokes is very similar to Funny Jokes. There’s over 6000 jokes that are available which are spread out across dozens of categories.

These are all great jokes app, so it’s hard to choose which one is the best. If I absolutely had to pick one, it would be 20000 Awesome Jokes for an offline jokes app, and Funny Jokes for an online jokes app. Install these two and prepare for a lot of fun with your Android device.