Sound Volume Amplifier is a free Android app that allows you to amplify the volume of your Android device with just a single click. The app increases all the volumes including alarm volume, call volume, music volume etc. Launching the app presents a window with a button shaped like a loudspeaker. 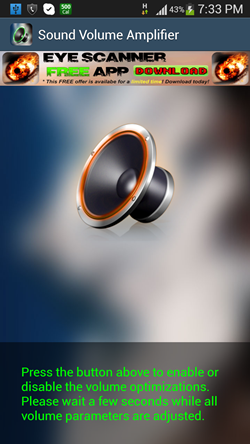 The app’s interface is very easy to comprehend, and simply clicking on the loud speaker button will initiate the process of increasing the volume on your device. When the app is doing so, you will be given a confirmation regarding the same. The confirmation is pretty obvious, because instead of silently amplifying the volumes, the app actually increases the volumes in a way that you can see the volumes being increased. 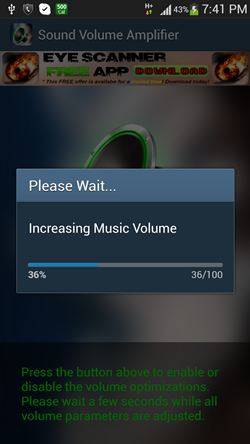 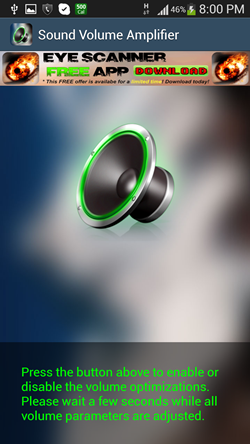 The speaker icon having a green outer rim indicates that the volume optimizations are applied.

To put it simply, tapping on the loudspeaker icon applies volume amplification. In case it is already applied, it removes the amplification. Though using the app is pretty simple, as it isn’t a root app, it needs to be running in the background for the optimizations or the volume amplification to work. Therefore when you try and exit the app, you are asked for a confirmation to either exit or minimize the app. If you exit the app, all amplification effects will be cancelled. So, it is advisable to Minimize the app if you want the optimizations to remain applied.

The app is ad-supported, but the ads are non-intrusive and don’t get in the way of the app’s functionality. Using this app is really a clever way of boosting your Android device’s volume.

Sound Volume Amplifier is available as a free download from the Google Play Store. You can also check out the PowerAmp Music Player for Android if you are looking for a music player which has an inbuilt volume amplifier.

Pros of this app…

My final take on this app:

Get Sound Volume Amplifier for Android.