GiMeSpace is a free software that a number of virtual desktops on which various windows and programs can be placed and organized in an uncluttered manner; it is like using more than one monitor for the computer by virtually increasing the desktop space infinitely.

This free desktop extender manages the virtual desktops horizontally. So, by scrolling the mouse in the left and right directions one can select the desired window.

But if a user wants to work on one desktop and doesn’t want other virtual windows to pop up due to accidental mouse scrolling, he can simply use the keyboard shortcut – Scroll lock. This key temporarily pauses the program’s functionality by switching off the virtual desktop windows.

Unlike other virtual desktop software like Desktops, and VirtuaWin, this free desktop extender makes it very easy to see the windows on your virtual desktop by just keep scrolling to left or right. 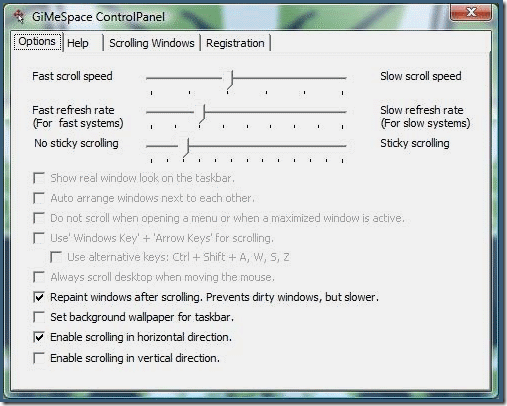 It also has two paid editions:

Features of this Free Desktop Extender:

Though simple and uncomplicated to use, it surely takes a little time to get used to it. It is the perfect software for those who have always craved for unlimited desktop space.

Another interesting way to get more desktop space is to Organize Windows Desktop in 3D. [via]