Shuriken Ninja, is a free Windows 8 physics based game app. Well, the gameplay of this physics cum puzzle game app is: you’ll go to different locations, where you have to throw shurikens on the targets and get points. But hitting targets is not that easy, because there will be obstacles between you and the targets: which blocks you from hitting the static targets. And also, there are some targets that can move. So, you have to match your timing with the movements of the targets. This Windows 8 physics based game app is a combination of both basic physics laws that includes gravitation, bouncing, speed, and puzzle (because each target is a puzzle). And you have to find out the right way of hitting the targets. 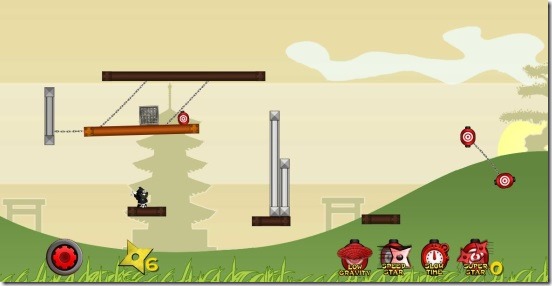 Gameplay of this Windows 8 physics based game app:

Well, this windows 8 game app is sure fun. The game difficulty is good, and it increases as the game advances to higher levels. The difficulty is somewhat hard but possible to achieve. It’s all about your thinking ability and timings. Because you can’t just blindly throw the shuriken, but you have to find a proper way, so that you can hit all the targets; because if you missed even a single target, then the game ends that very moment. 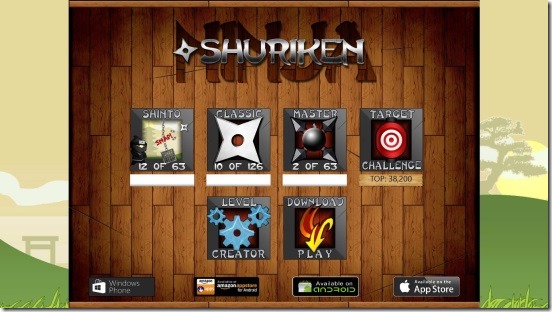 For each level you’ll be given fixed number of shurikens. So, you have to use them well. Each single shuriken is valuable. The best thing about this Windows 8 physics game app is: unlike most other games of this good gameplay, it’s totally free. There are more than 200 game levels. Each level is categorized in 3 types of gameplay: Shinto, Classic, and Master. The Shinto and Classic are the simplest ones but are equally challenging. In these type of gameplays, you’ll be given one single type of shurikens, and completing each level gives you points and shuriken star. The only difference between these two is the locations and different difficulties. While in Master game type, you’ll get two or more type of shurikens, and completing a level gives you star, points, and belts. But in each game type, the gameplay remains same. That is, hit all targets, to clear current level and advance to next higher one. 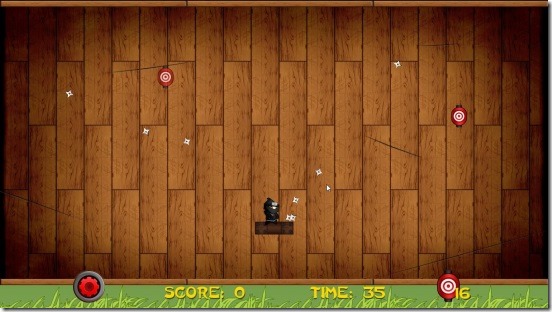 Besides these 3, there is one more game type: Target Challenge. Here, you’ll be given a specific time limit, within which you have to burst as many targets as possible. All the targets come and go, that is, they stay in the playing area for a short time, and then vanish or move away. A good thing in this game type is: some of the targets contains powers; such as, throwing shurikens with greater speed, throwing 3 shurikens at a time. If you are able to hit a specified number of targets, then only you can advance to next level. Or else the game ends.

You play as the ninja, and you always stand on a single place, that is you can’t move. But, you can throw shurikens. All you have to do is decide where you want to throw the shuriken and, simply click left or right mouse button to throw shuriken to that direction. But beware of the obstacles. Try to find a way so that the targets gets blown without being getting blocked by obstacles. 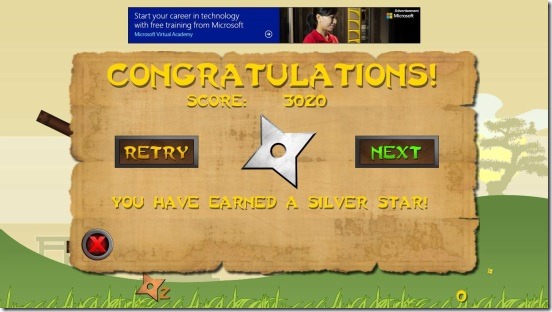 Key features of this Windows 8 physics based game app:

Shuriken Ninja, sure is a fun and addictive Windows 8 physics based game app. The gameplay, sound, animations and controls; all are in the great row. The physics rules works fluidly. But, it’s the game play and the completely free levels, that makes the game awesome. I did spent a lot of time playing this game, it’s difficult but interesting. No doubt that, this is one of the most downloaded Windows 8 game.

You might also like this free Windows 8 Maze Game App where you’ll be a ninja hero, sneaking through the enemies region, and taking back your rightful acorns and snatching victory from the enemies hands.