Jump Ninja is a free game for Windows 8 and 8.1 in which you play as a ninja who has to jump over the flying stars being thrown at him. When you launch the game, you will be presented with the gameplay screen where you will be able to start the game by simply clicking on the Play button. Once that’s been done, the ninja will start jumping. The faster you click, the higher the ninja will jump. The game has a twist in a way that if the flying stars thrown at him hit him, then the ninja dies and its game over. To avoid this, if you click towards the right side of the screen, the ninja will face right and hit the star coming at him from the right side, and if you click towards the left, it will hit the star being thrown at him from the left side of the screen.

Jump Ninja is available for free from the Windows App Store.

Main features of Jump Ninja for Windows 8 and 8.1…

When you install and launch Jump Ninja on your device, you will be presented with the following screen. 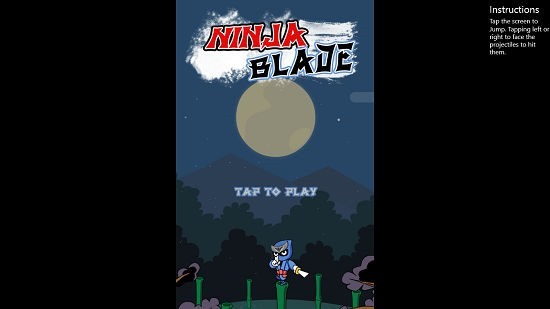 Simply tap anywhere on the screen to start the game. Once started, your ninja will jump in the air. The faster you click, the higher it goes. You can see the gameplay interface in the screenshot below. 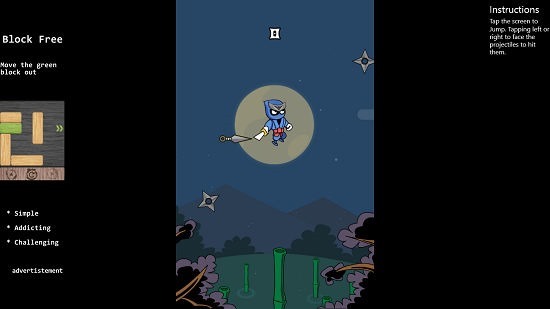 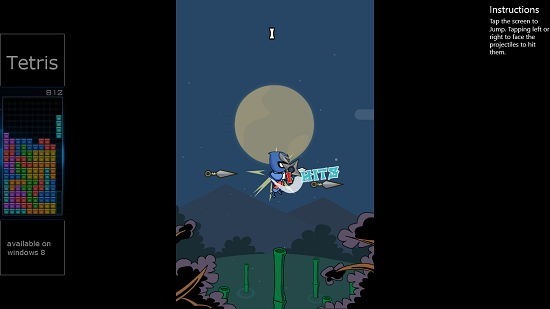 If you face in the correct direction, then the ninja will cut through the star thrown at him and jump higher successfully, as you can see above. You can change the direction in which the ninja is facing by clicking on either side of the screen. If you click on the left, the ninja faces left. If you click towards right, the ninja faces right. It’s game over if your ninja gets struck by a star. If at all that happens, you will be shown the below score stats screen. 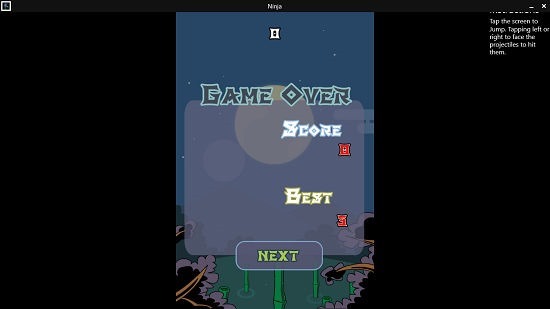 The game is pretty simple to play but difficult to master. The controls are relatively easy as well, and the game is best played on touch screen devices where instead on clicking towards the left or right side of the screen, you can simply tap the right or left corner of your device. This sums up the features of Jump Ninja in brief.

Jump Ninja is a well designed game that allows you to pass your time with ease while having fun. The overall concept of the game is great and hence it’s a truly fun game to have in all sense.