WinMaximumize is a free window maximizing software for Windows which you can use in order to automatically resize windows to the free remaining area on your desktop. It can be used when you for example have two or more windows open and you want to resize one of them alongside the others so that none of them overlap each other, but also so that they are all open next to each other. 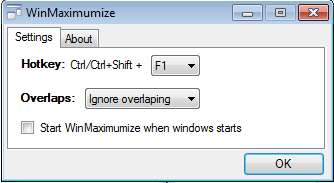 The small image above is all that you’re gonna see from WinMaximumize. This would be the control panel, where you can change just three options. Hotkey option at the top would be the most important one to know out of the three, followed by the middle one. Without knowing and setting the hotkey, you can’t activate the windows resizing using this free windows maximize utility.

Key Features of WinMaximumize to Automatically Resize Windows are:

Modern monitors are very large, and they can have a lot of windows open at the same time. Normally you would have to drag and resize these windows manually in order to make them all fit nicely alongside each other, and to maximize the usage of the free space. By combining the Windows snap feature and WinMaximumize, you can now avoid doing this manually. Here are few tips to help you get started.

How to Organize and Maximize Windows in Available Free Space with WinMaximumize?

For the purpose of this demonstration, let’s say that you want to combine three windows and have them open at the same time and all of them taking up all of the free space of the monitor. The way that you can do that is by first using the Windows snap feature to expand one window to half of the screen, and then resizing it to the desired size. After that open up the second window and do the same thing. With snap put it to the half of the screen and then change its size. 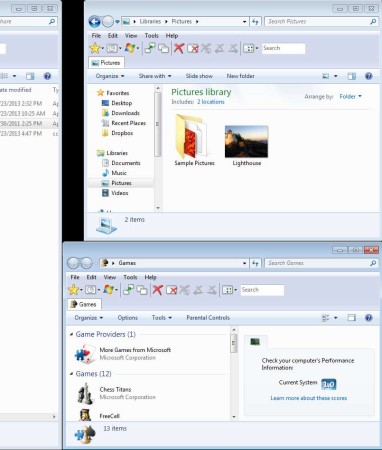 Now open up the third window and in order maximize it alongside the other two windows, and to maximize all the other windows also you just need to press the assigned hotkey from the main control panel while the window is selected. By default the activator will be Ctrl + F1. Once you do that, WinMaximumize will automatically resize the windows, either with or without overlapping existing one, depending on the settings and on the existing window arrangement.

WinMaximumize is a very useful tool, which can be very helpful and save you time that you would normally spend moving window borders closest possible to each other by hand. It does all of these things automatically, and it’s very easy to set up. Free download.

You may also try WindowPad reviewed by us.