WindowPad is a free software which helps you to snap windows that are opened on your desktop screen to the screen edges, through simple keyboard shortcuts. It’s an amazing desktop utility that makes use of your keyboard’s number pad to snap open windows to the screen edges.

Windows 7 has an Aero-Snap feature, which provides a quick and easy way to adjust the size of open windows, by dragging the open windows to the edges of the screen. You can drag the windows to any of the edges, and make them expand vertically, arrange the open windows side by side with another window, or take up the entire screen. This not only helps in better organizing the windows, but lets you compare their contents as well.

WindowPad expands this feature and lets you manner fully arrange all the open windows on your screen, using your keyboard’s number pad and the Windows key. It arrange the windows in the same manner on-screen, as the number keys are arranged on your keyboard’s number pad. For example, pressing Win + Numpad1 will move the screen to the bottom left corner of the screen, Win+Numpad2 will stretch the window to the bottom half of the monitor screen, Win+Numpad3 will move it to the top right corner, and so on. 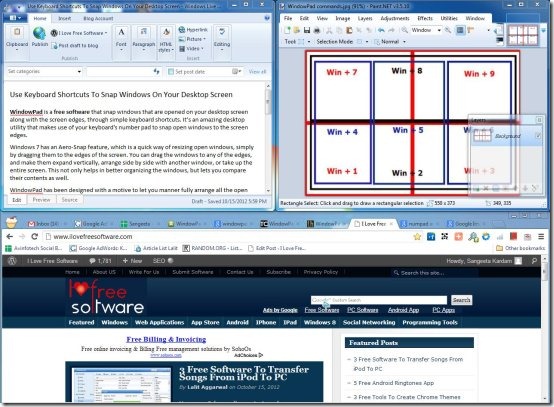 Apart from that, it also let’s you move open windows between different monitors in a multi-monitor setup.

WindowPad is very easy to use. Just download the zip file from the website, extract it, and double-click on the executable file to run WindowPad. It will sit in your system tray area and will run in the background until you suspend it. Then press the Windows key and the respective number keys from the keyboard’s number pad to snap windows to the desired screen area. Let’s have a look on various key combinations that can snap windows to different screen locations. 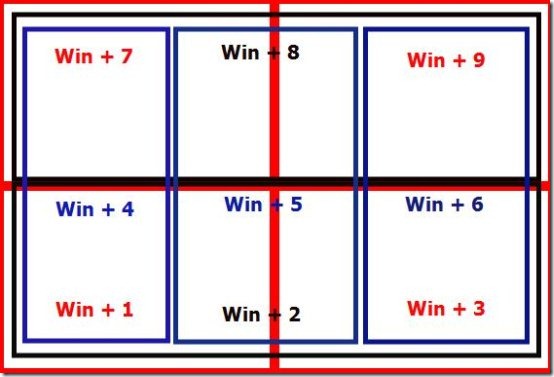 Also, check out similar software like Aquasnap and WinSplit to organize open windows on desktop screen.

WindowPad is a nice utility software that helps you in organizing windows on the monitor screen and let’s you compare multiple windows together. It makes use of the keyboard’s number pad and provides quick access keyboard shortcuts to manipulate windows, either on one screen, or between multiple screens in a multi-system environment. Moreover, you can add your own shortcuts using the included .ahk script file.