Here are 5 free QR Code Generator apps for Android. These apps let you quickly generate QR codes from your Android phones. The type of information that these apps let you include in QR codes is any URL, text, contact info, clipboard, and even location. So, essentially, you can share almost anything from your Android phone by generating QR code of that using one of these apps. Some of these apps  can even be used as a QR code reader, so you don’t need to install a separate QR Code reader app . 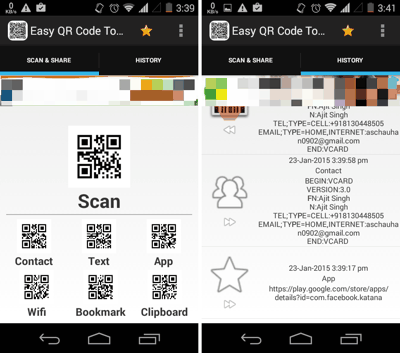 Easy QR Code Toolbox is one of the best options out there if you want an all-in-one QR Code Generator. This app can generate QR Codes from a Contact, Text, App, your WiFi connection details, a Bookmark or even your Clipboard! The interface is extremely simple, and on the app’s start-screen itself you can select the type of content that you want to Generate a QR code from. For example, if you select the Contact Option, you will be automatically taken to the Contacts picker to select the Contact you want to generate a QR Code for, and then you can share the QR Code as well.. The App option allows you to generate a QR Code for any installed app as well by encoding the Play Store link, while the WiFi option can be used to share the details for your WiFi Connection with someone. You can even share a Bookmark or the contents of the Clipboard! This app can also be used as a QR code reader. 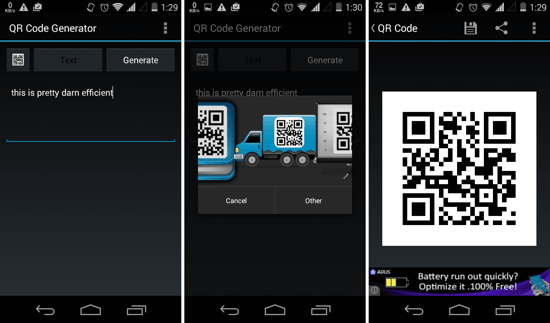 Now let’s move on to something simplistic. QR Code Generator, as the name suggests, is a no-frills app which is supposed to just generate QR Codes from any text that you type in the text field provided within the app. One feature that I really liked in this app is that it lets you change the background of the generated QR code (as shown in the second screenshot above), and save or share the generated QR Code. Other than that, there are no extra features whatsoever. The interface design is aged, but the app generates reliably correct QR Codes. The app is also extremely lightweight and should run even on older Android devices without a hiccup. If you just need a QR Code Generator for converting text to QR Codes, you should download this app and ignore the bland UI a bit. This QR Code Generator is for those of you who wouldn’t be content with text-only QR Codes and would like to use QR Codes for more uses than one. Using this app, you can easily Share the Play Store link of an app, your Clipboard, a Contact, Location, SMS, URL, or just some usual plain text. One neat feature is that it can get your position for the exact Latitude and Longitude and share it as well (yep, GPS to SMS is also a great app for doing that). 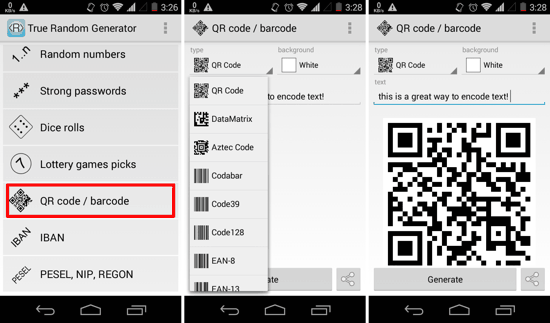 True Random Generator is a great app not just for Generating QR Codes but for generating other coded data as well. Once you open QR Code / barcode, you can enter the text you want to generate the QR Code from. Once the QR Code is generated, you can easily share it with any one using the ‘Share’ button alongside the “Generate” button. The code was easily scanned and decoded with a QR Code Scanner without a glitch. If you are okay with QR Code Generation for text only, then this is a good app for you; and otherwise, you should look at the other apps I have included here. 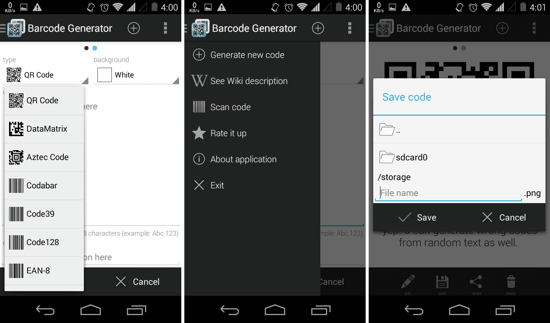 Barcode Generator is another simplistic app which can generate different types of Barcodes (as the name suggests), including QR Codes. The app can be used to generate QR Code, DataMatrix, Aztech codes, and 7 other types of barcodes as well. On opening the app, you can see all the past codes that you have generated in a swipable full-screen view or list view. The app can only transcribe text to generate a QR Code. You can set the QR Code background to be black or white. Of course, as I mentioned above, the killer feature is the ability to generate other types of barcodes as well.

So hereby I will conclude this list of Free QR Code Generator apps for Android. Which one do you think met your requirements? You will have to scroll only a wee bit more to share your comments.