As a result of our previous article about alternatives to Microsoft Excel, several readers suggested some more alternatives. Of course we just had to check them out, and here is what we discovered.

In recent years several so called ‘Web Operating System’ (or ‘Operating Systems in a Browser’) platforms have sprung up, and some of them supply spreadsheet-editing applications. The advantage of a web-based application is that you don’t need to install anything, you can often use them while traveling, and you can use them regardless of which type of computer you own. Sometimes, even smartphone users are not excluded.

Two such systems were recommended we try; Peepel and EyeOS.

Peepel is actually one of the ‘Web Operating System’ sites that started to appear in the last few years (the first I heard of was “YouOS” which is now closed). 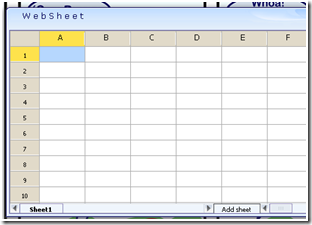 There are multiple ‘apps’ available in Peepel, one of which is a spreadsheet manipulation tool that looks and feels somewhat like Excel (we also covered Peepel Web Writer earlier).

You can enter text, numbers and formulas in quite a similar manner; and there’s a fairly friendly formula wizard that contains a list of available formulas, grouped into several categories, which are available for use in the spreadsheet.

Uploading a file to Peepel is quite possible; it worked just fine with an .xls (Excel) file I tried. It’s just a matter of finding the very well hidden option of uploading.

Exporting a file back to my computer proved to be more difficult; I didn’t manage to actually do that successfully – the process is quite straightforward, but when I selected the export format (Excel or ODS), a small ‘working’ dialog opened and that was it. I was not asked where to put the file, or was anything else working.

In short, Peepel is useful for displaying and working on small spreadsheets if you only care about their availability anywhere, or if you cannot be sure you’ll have access to Excel on a computer. However, you cannot take the data back out of it, at least not at the moment, so for serious work, I’d not recommend it. And unless you need one of the features available only there, I’d say Google Docs is a better online, always-available alternative.

The EyeOS web operating system has the same basic idea as Peepel. It also contains a few office-like apps, one of which is a spreadsheet implementation. 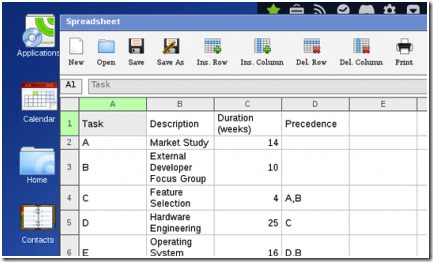 However, it was a big disappointment for us.

To conclude, it does not really allow any real spreadsheet functionality, and you cannot really upload files to it.

If you need to create a very simple spreadsheet file, you can use EyeOS and then download it to your computer later. I guess because you don’t have a Google Docs account, or cannot use it, for some reason. Otherwise, it would be easier and quicker to use Google.

It can save files in Excel 5.0 format, which can be opened in any version of Excel, but I have not been able to create an Excel sheet that it will open, even using Excel 2000 (I don’t have an installation of Excel 5.0 available…). It does allow opening of CSV files, but that’s only good for the data, not for the logic (formulas). 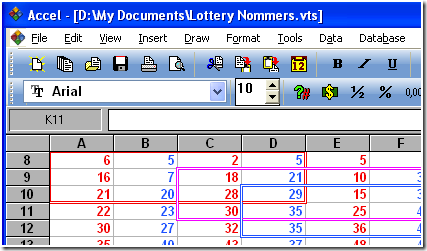 It’s free software, small to download and quick to install. You can use it instead of Excel if you don’t have any other option. It is most comparable to OpenOffice, which is also free, and not to the online applications, as they are do not need any installation and are available anywhere (as long as you are online, that is). Compared to OpenOffice, then, it doesn’t measure up if you need to open existing files, but you can create and edit spreadsheets, and as long as you don’t need those ‘fancy new functions’ it will be enough. You can even open your file later in Excel, and it will work.

The originally suggested software was Softmaker Office 2006; the current version is 2010, and it’s not free, it costs $80 (or 70 Euro). The older version – 2006 – is still available on their site for free; they suggest you upgrade to the paid, newer version if you like their product. 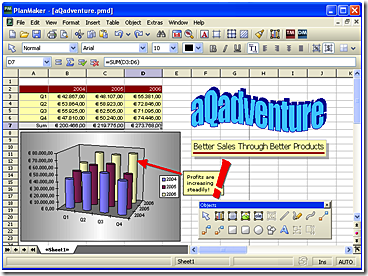 All in all, it’s a very nice application that seems to be a very good free Excel alternative. It’s lighter than OpenOffice, and seems to be easier to work with if you are used to Excel.

So which to use? Personally I would not select the web-based alternatives over Google Docs. In terms of installed applications, Softmaker might be worthwhile testing if you want a lighter, cheap/free Excel alternative but are used to working in Excel and do not want to start over with something like OpenOffice.

What do you think about these choices? Got any more suggestions that we should try?

Yoav Ezer is the CEO of Cogniview, which produces PDF to XLS conversion software.

Prior to that, Yoav was the CEO of Nocturnus, a technology-centered software solution company.