Danger Dragon for Android is an endless side-scrolling tap-to-fly game with retro pixel art graphics. You play a young dragon and have to avoid as many obstacles as you can by flying past them, and also collect coins and power-ups to increase your overall score. The Game is a bit similar to Flappy Bird in terms of mechanism (you have to tap on the screen to keep the dragon flying), but has added elements and features which differentiate it to a great extent. If you love Flappy Bird (and its alternatives), you should try Danger Dragon too because rather than being a clone, this one is more on the lines of being ‘inspired‘. 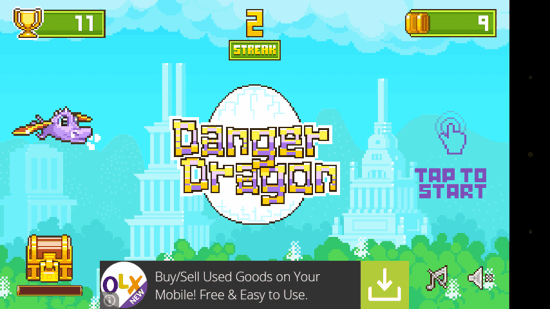 Danger Dragon is all about going as far as you can AND collecting coins. The dragon is controlled by taps on the screen — the quicker you tap, the higher the dragon goes. You have to avoid falling to the bottom edge of the screen and colliding with the obstacles that come your way. These obstacles can be in the form of Axes or Blades (at least that’s how far I could go).

The game is pretty smooth to play and does not lag at all. 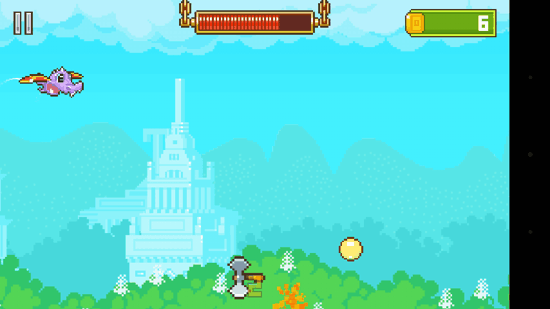 There are coins scattered throughout the game. But, collecting coins isn’t as easy as it sounds. The coins seem to appear just after the moving obstacles — making it a tough task to collect them. Each coin that you collect adds significant points to your Score. In fact, collecting coins seems to be the major source for higher scores, rather than the obstacles. 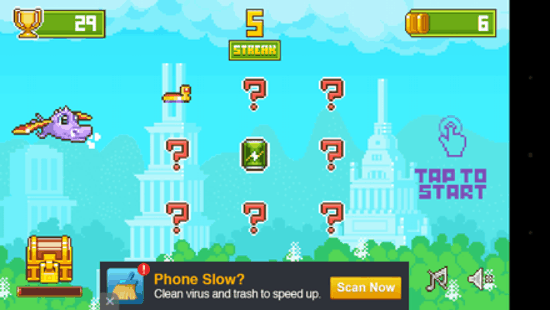 There are Power-Ups in this Game too! These Power-Ups appear as Unlocked items if you even get them once.The only power-up I could find was the one which made the Dragon small and hence made it easier for me to cross the hurdles (this unlocked power-up is shown in the screenshot above right in the middle). Explore the game more to unlock and discover other Power-ups.

If you want to kill some time and love the retro pixel art that a few generation old games relied on – you should NOT miss Danger Dragon for Android. The graphics are cute and the gameplay is as simple as it gets. One concerning thing is the fact that I could not figure out the game’s Scoring mechanism and the devs too seem to have skipped mentioning that. The start-up (first few taps) is sometimes marred by a few hiccups, but other than that, the game runs smoothly with a uniform frame-rate. Trying this free game won’t hurt, and who knows? You might even like it!

Get Danger Dragon for Android