ToDoList is a free task manager application where you can easily keep track about various different obligations that most of us have, and which most of us have to complete, whether they be personal or professional, ToDoList can manage them all. During installation you’re gonna be asked some basic ToDoList configuration questions, but other than that, everything else was pretty much uneventful and when everything was completed we were greeted with the ToDoList interface, with a sample task list opened. 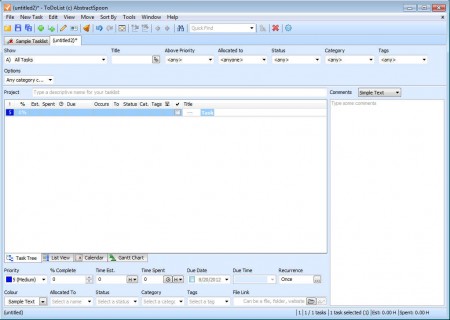 On the image above we don’t have the sample task list opened, well actually we have, only it’s opened in a tab next to the one that’s showed, yep, you’ve read that correctly, there are tabs available in the ToDoList task management utility, along with other interesting features:

A lot of other useful features can be found, like for example the quick find tool, which you can use if you have a lot of different items in the to do list. Interface of the ToDoList might be a little bit overwhelming to some, because like you can see it’s packed with options, it even has double tabs, one at the bottom and another at the top of the main work area. Don’t worry though, using ToDoList is very easy, and it will only take you a couple of minutes to figure out how things are done.

How to manage tasks and keep a schedule with ToDoList

First thing that you need to do is create a new task list, you can do that by clicking on File >> New task list. If you already have a task list open, then the newly created one will be placed in its own tab. Once that a new task list is created, you’re gonna be able to add tasks: 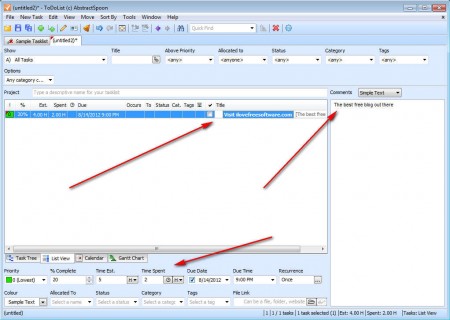 Right click anywhere in the empty list area and select New Task. Enter the task title, at the bottom you can set time limits which the task is gonna have, for example due date and time, and you can even keep track of the task completion in percentages. In the right column you can add task comments, if they need to be explained in greater detail. By switching to the Calendar tab, all your task will be marked in a calendar: 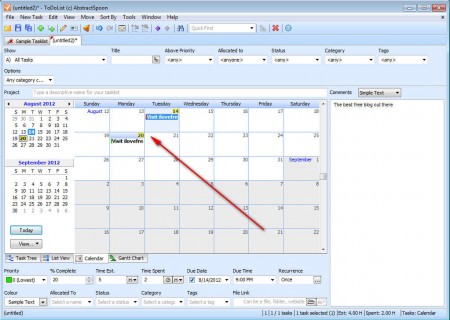 Task lists are a great way of how you can make sure that duties which you need to complete are not forgotten, this goes especially for all those who have a lot on their plate. Motivation can be another reason why you should have task lists, especially when it’s a task with a time limit, with which you can race. ToDoList can help out with everything that you need, plus it’s very easy to use, despite of it’s appearance which is everything but simple. Try ToDoList and see if it can help you manage your tasks better.