Entanglement is a free puzzle game to play on Chrome browser. Make the longest path by changing the orientation of hexagonal tiles, etched with different paths and make high score.

Entanglement is developed by Gopherwood studios. In Entanglement you have to make longest path and score high. Just install this Google Chrome extension and start rotating those tiles to make paths. There is multiplayer option also available, to play with your friends; in this free puzzle game.

Entanglement is a brain teaser and full of puzzling paths. You just have to create paths, to make it the longest one and score high. There is multiplayer mode also in this game, in which up to six players can play this game simultaneously. Let’s see more details about this game.

The layout of the game is as shown in the above screenshot. The score is indicated on the top left and if you want to swap the tile design, then you can do it by using the option available on left bottom. On the top right, you have options to mute: game music or sound effects and below Menu option is available. In menu the options are: Main menu, new game, how to play, and scoreboard. In main menu you have options for single player called Solitaire and multiplayer in which you can accommodate up to 6 players. In multiplayer, the players play the game simultaneously on one board itself; starting from middle tile from all six sides or depending on number of players. In multiplayer, players take chances one by one and compete for high score.

Gameplay: In the middle of the whole layout you will see a hexagon; indicating 0 segments on it. This hexagon indicates the number of segments through which your path is flowing. Generally the first player’s color is indicated in Maroon and in multiplayer, each player has their own color. So, once the path flows, your duty is to rotate the hexagonal shaped tiles etched with different paths and then fix it to make the path flow to next tile and so on. The only rule in this game is, the path should not touch the outermost maroon colored wall or the middle tile. The more number of tiles the path flows, the more score you get. The controls are indicated after the below screenshot. 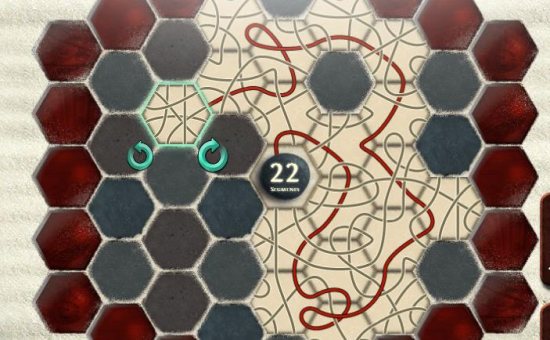 Controls For The Game Entanglement:

You can play the game, with both mouse and keyboard.

Mouse controls: Move your mouse over the tile which has to be rotated, you will see curly arrows below it. Click on them to rotate the tile and when you want the tile to be fixed, click on the tile for the path to flow. Click on Swap option to swap the paths in the tile.

Keyboard Controls: To rotate the tiles, use the left or right arrow keys. Use Spacebar to fix the tile and use [Z] to swap the paths in a tile.

Have a look at this YouTube Video on Entanglement.

Entanglement is a good brain food game. Try this amazing game and have fun in your free time. You can also try: Sequester and Dodge games.

Click here to install Entanglement on Chrome and play even without internet connection.