Dodge is a free spacecraft game online that you can play online for free. Dodge enemy missiles and mislead those missiles to kill the enemies.

In Dodge game you have to drive your spacecraft and escape from enemy’s missiles. This game is quite different from other games in which you have to shoot your enemies and kill them. In this game the enemies keep shooting at you and you have to protect yourself and use their own missiles to kill them.

Dodge game is set in a dark environment and the spacecrafts look like they are illuminated with neon lights. Of course the environment is space, so it looks dark. Your spacecraft is colored dark Blue shaped like trapezium and the enemies are colored in various other colors. Every enemy has their own strategy but you can just move around the space to escape those missiles. Your strategy should be to guide their missiles to kill themselves.

Let’s know about our enemies. First come the yellow colored diamond shaped spacecrafts who stay at one place and shoot missiles. Then the egg shaped indigo colored space crafts who can stroll around and shoot missiles. The green colored circle spacecrafts stay still for sometime at a single place and shoot random missiles in all directions. The purple colored square spacecrafts stay at one place, then shoot and disappear; they appear again at a different place. The last kind of enemy is the shooters in dark yellow color, they shoot two missiles at a time. 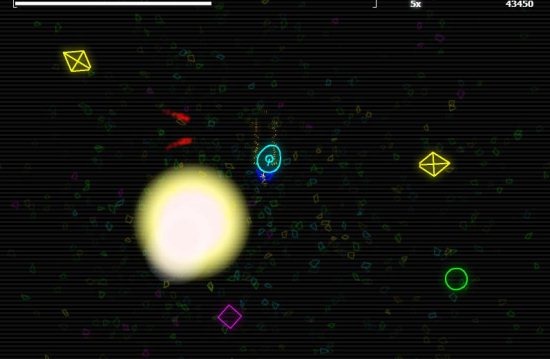 This missile game consists of 20 intense levels. Survive till the end and put your name in those bravery records. Your spacecraft has a health meter at the top left. If your spacecraft’s health decreases less than half of the health, then you can spend 25,000 points to refill it. You get points by killing your enemies and completing the stage faster. After every stage you will be shown the stage name and if you have enough points then you can refill at that point only (as shown in below screenshot). In the beginning, you get one enemy, then in the later stages the new enemies will be introduced in the game. Just drive your space craft through the gaps and mislead the missiles to kill the enemies.

Controls Of This Missile game:

The controls of this missile game are: 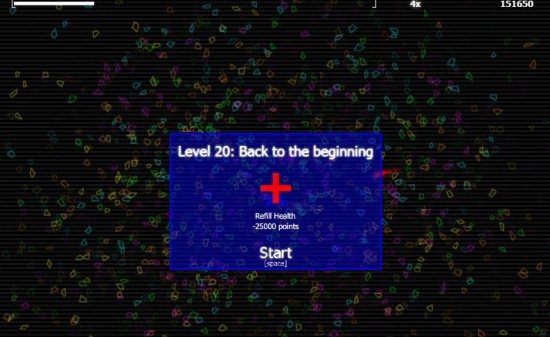 Have fun playing this different game. The game background and effects are set in a nice background. If you like to play different games like these then try Boss Rush shooter game; where you can play as the Boss.