FSL Launcher is a free launcher for Windows that lets you organize shortcuts and quickly launch applications. The program offers a tabbed-interface to group similar items, such as applications, games, internet, and utilities, so that you can easily find the desired shortcut and launch it with ease. This way, you can not only organize shortcuts in a better way, but can also make your desktop uncluttered.

By default FSL Launcher comes with just four tabs (as mentioned above), but the great thing is that it allows you to create as many tabs (to group similar items) as you want. Each tab can have multiple number of application shortcuts, program shortcuts, files, folders, and other utilities. You can also create a zipped backup of these groups and restore them whenever needed.

Another interesting thing about this free launcher is that it allows creating shortcuts from scratch, apart from adding pre-made shortcuts through drag and drop. Besides that, it provides lot of cutomization options to suit everyone’s needs. We will have a look on them a moment later; let’s first see how this free launcher works.

FSL Launcher is available as a complete freeware and can be grabbed using the link given at the end of this article. After installing and launching the app, you can start adding shortcuts already available on your system to its interface, through drag and drop.

To create new groups, you can open the Group Menu, and click on Add to Add New Group. This will create a new tab on the main interface where you can add the matching shortcuts. 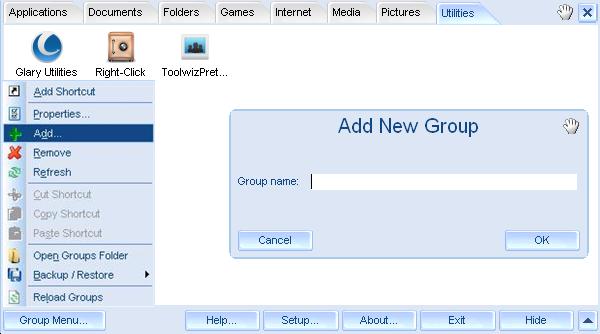 A noticeable feature of the app is that shortcuts can be moved between its tabs through simple drag and drop. So if you by mistake, add a shortcut to a different tab, you can drag it to the right tab and drop it there to make it listed on its right place.

The launcher Hides itself to the system tray, so whenever you want to access a particular shortcut, you can open it from the tray area. 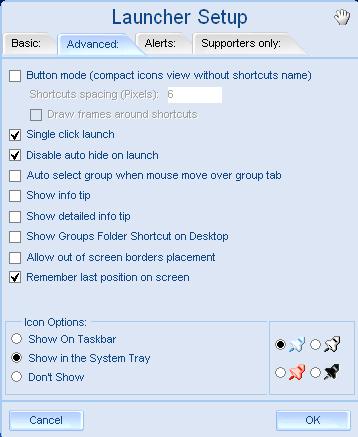 Also, check how to backup and restore icon positions on desktop.