Eusing Launcher is a free application launcher that allows you to organize dozens of icons on your desktop and lets you easily launch the programs. It’s a handy and lightweight application that organizes all your desktop icons and program shortcuts in form of a circle. This way you can easily find the desired program icons and launch them quickly.

This application launcher offers to add up to 36 icons in the circle and provides various setting options to adjust the diameter of the circle, size of the icons, and icon quantity.

If you have a habit of adding shortcuts and saving files on desktop, then you can use this app to organize them in a better way.  This helps in making your desktop look more organized and less messy. 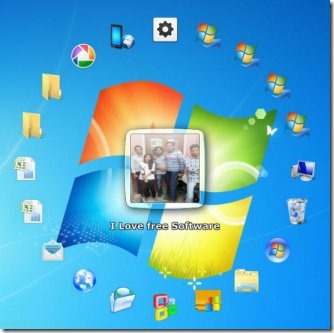 Eusing Launcher is a simple launcher app and doesn’t take much time to get installed on your system. You can simply download the app from the website and install it to your system, following easy instructions. After installing the app, you can launch it and organize all your desktop icons in a jiffy.

To add icons to the circle, simply drag them from the desktop and drop them to the desired position. This method works in Windows XP and all later versions except Windows 7. This is because the user account control in Windows 7 doesn’t support any program that is not certified to run on Windows 7. So, if you are using a Windows 7 PC and facing problems in adding icons to the circle through drag and drop, you need to disable user account control to use this feature. Although, this is not a recommended setting in Windows 7, however you can temporarily configure this option while you use Eusing Launcher.

Once you’ve added all the desired icons to the circle, you can hide them from your desktop. This can be achieved through the “Always Hide Desktop Icons” option which you can find by right clicking on the app’s icon at the center. To get the Windows Desktop back, just click on this option once again. 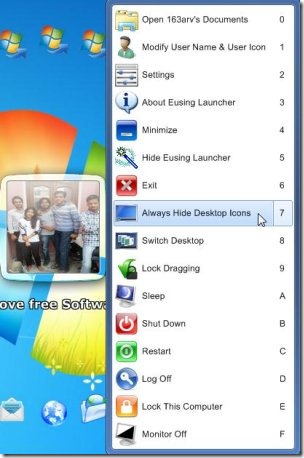 When you mouse hover any icon in the circle, its name appears below the app’s icon at the center of the circle.

Also, check how to backup and restore icon positions on desktop.

Still if you want to have more than 36 visible icons on your desktop, you can use other similar apps like My Cool Desktop and Desktop Modify.