Here’s a list of 5 NASA wallpaper apps for Android, which you can use to find interesting new wallpapers with the usual NASA themes of Space and beautiful Earth shots from the orbit.

Finding a good wallpaper takes a lot of time. Those who love NASA wallpapers will be pleased to know that there are apps in the Play Store that you can make it easier to find NASA wallpapers. Let’s see what exactly is available.

Space Images is an app released by NASA itself, more precisely by the Jet Propulsion Laboratory, which is a division of NASA. 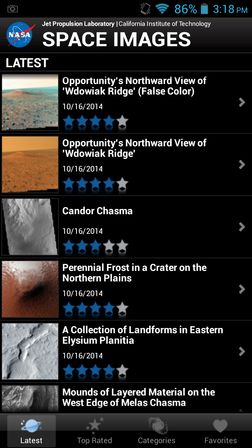 Entire app is devoted to images concerning space. They are spread out across categories (educational, planets, galaxies, weather, etc). Each image has a short explanation next to it, which helps you understand what the image is showing. Images that you like can be set as a wallpaper straight from the app.

NASA App is the official educational app released by NASA itself. It’s not a wallpaper app per se, but it does have an entire category designed for images that NASA gathers from its telescopes and spacecraft out there in the vast emptiness of our galaxy. 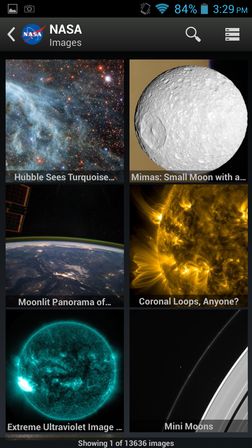 Images can be downloaded to device or set as wallpaper straight from the app. Note that this isn’t just a NASA wallpaper app, it’s actually a full-fledged educational app that you can use to find info about NASA missions, read tweets, keep track of news, find video updates, etc.

Make sure to also checkout NASA Today’s Image For Windows 8: Get NASA Image Of The Day.

NASA Earth HD Wallpaper FREE is an actual wallpaper app that only scoops up wallpapers from the NASA and shows them to you. 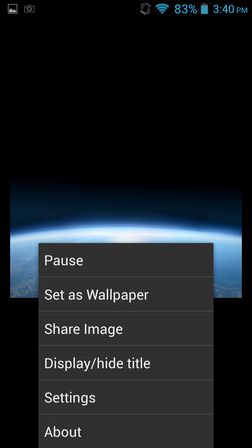 You can see the app in action in the image above. It’s very minimalistic with just the image showing. Tapping on the screen will show a small window at the bottom explaining what the image is about. Swipe left-right to switch between images. Tap on the settings button (the one next to Home) will open up a menu that lets you set the image as a wallpaper, among other things.

Nasa Wallpapers by KraZee Apps is a much more optimized NASA wallpaper app that lets you scroll through a gallery of images, instead of just browsing image one by one. 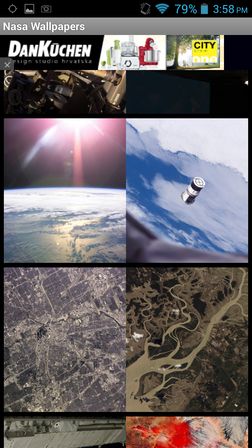 Available images include images of Earth from orbit, space, continents, spacecraft, etc. When you find something you like, select that image from the gallery to open it up fullscreen. Once it’s fullscreen, tap on the screen to open up an on-screen menu for setting the image as wallpaper or sharing it with your friends.

NASA Wallpapers this time by KZKN Dev is another app entirely devoted to wallpapers from the NASA website. 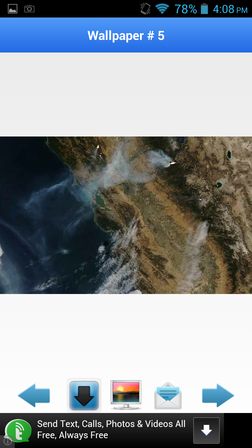 Notice the controls at the bottom that you can use to switch between the images and also to set the photos that you like as a wallpaper.

Out the apps from the list above, I recommend that you try out Nasa Wallpapers by KraZee Apps. Gallery scrolling is straight to the point and wallpapers are great. Other apps aren’t that bad either. What do you think? Leave a comment down below.