Notepad++ is a fantastic tool that tons of people use. It has some very smart features that improve your productivity. Let’s say you have been working on a tricky piece of code in Notepad++ since quite some time and now want to take a much needed break. Now you can do that from within Notepad++. Falling Bricks is a free plugin for Notepad++ that lets you play Tetris game within Notepad++. So, you can use Notepad++ not only to do some serious work, you can now also use it to let out some steam. This Tetris game for Notepad++ is completely free and is already available in Plugin Manager of Notepad++.

How To Install Falling Bricks Tetris Game in Notepad++

You can see the animation of this Tetris game for Notepad++ above. Quite interesting.. right? It is pretty simple to install this game in your Notepad++. Just go to Plugins –> Plugin Manager –> Show Plugins. Under “Available” tab, scroll down to get to “Falling Bricks” plugin. Select it and click on Install. Now you are all set with a nice Tetris game right within your Notepad++.

How To Play Tetris in Notepad++:

Let’s play this interesting game. Go to Plugins –> Falling Bricks –> Play Falling Bricks. This will bring a small Tetris window on top of your Notepad++ window. It won’t close any file that you have been working on. 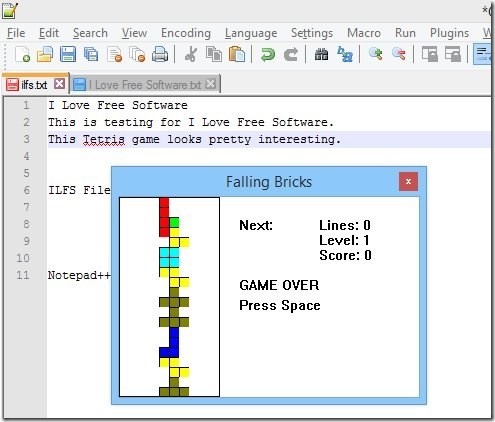 The game has exactly same rules and gameplay that the classic Tetris game has. You will see lot of pieces falling down one after another, and you have to align them in such a way that they fill the horizontal void. You can move pieces left and right by using left and right arrow keys respectively. To increase the speed of any piece, you can use down arrow key. And to rotate a piece, use Spacebar.

The Tetris game for Notepad++ shows you number of lines that you have been able to complete, your score, as well as your Level. It also shows the Next piece that will fall.

This game does not have any customization settings, neither any option to choose a level etc. It is not supposed to be a full fledged advanced Tetris game; it is just supposed to give you a few minutes of fun to refresh your mind, before you go back to doing what you were doing in Notepad++.

Some other interesting Notepad++ plugins we covered earlier include NppDocShare, and Customize Toolbar for Notepad++.

My Opinion of Falling Bricks for Notepad++:

I am a big fan of Notepad++, as you would have guessed from number of Notepad++ plugins we have been covering lately. And this Tetris game for Notepad++ came as a pleasant surprise for me. This game can be a mind freshening game to play while working for long hours in Notepad++. The game is simple, completely free, and fun to play. I am quite happy that someone even thought of making this type of plugin for Notepad++. Long live the developer.

Go ahead and install this Tetris plugin for Notepad++. I am sure you will have some fun.