Here’s a list of 3 wake up light alarm apps for Android which you can use to have a light wake you up in the morning. Research shows that when we wake up in the morning with a gradually increasing light source next to us waking up is less of a shock for our bodies, because the light tells our bodies to get out of deep sleep. Normally we would have the Sun as our light source, but since not all of us sleep near windows, wake up light alarm clocks were invented to imitate the Sun.

These apps are alarm clock apps that work on the same principle. 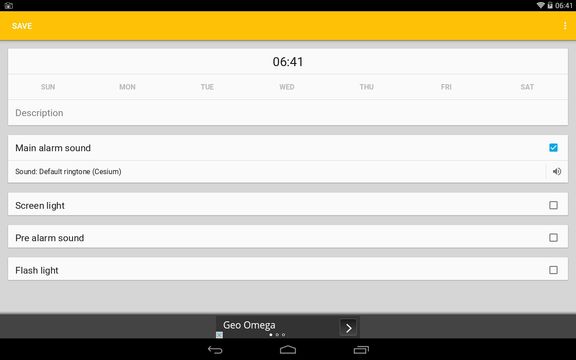 Light Alarm Clock is a wake up light alarm app that I personally use. It lets you use either the device screen for the wake up light, or you can alternatively use the LED flash. I suggest that you do not use flash as a wake up light, because I’ve been reading that using it can cause the flash LED to die sooner.

Setting up the alarm is pretty much the same like it is with every other app that I tested. What’s different is the option which you can see where either the flash or the device screen can be setup as a wake-up light. Other options that you’d usually expect from an alarm are also available here, like alarm repeating, gradually increasing alarm sound and gradually increasing screen brightness, vibration, etc.

Also, have a look at Android Alarm Clock App That Makes You Solve Puzzles To Turn off Alarm. 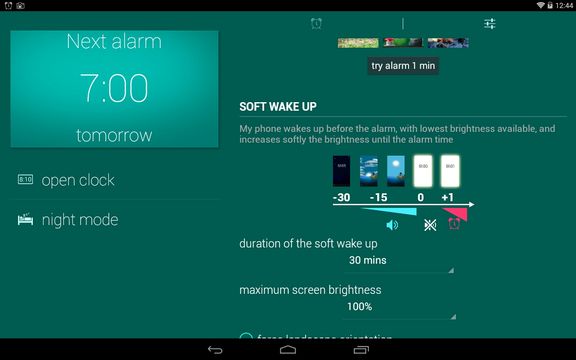 Glimmer (luminous alarm clock) has a more elegant look and feel to it, as you can see from the image above. After running the app you’re going to see an Add Alarm button in the bottom right corner of the interface.

Tapping on it starts up the new alarm creator. I focused in on the wake up light section of the setup so that you can see how it works. Gradual screen brightness can also be setup here, for 1 hour max before the alarm goes off. Glimmer also comes with lots of other useful features, like sleep mode (which disables notifications before bed time, by default bed time is 22:30h), alarm sounds to make sure you wake up and more. 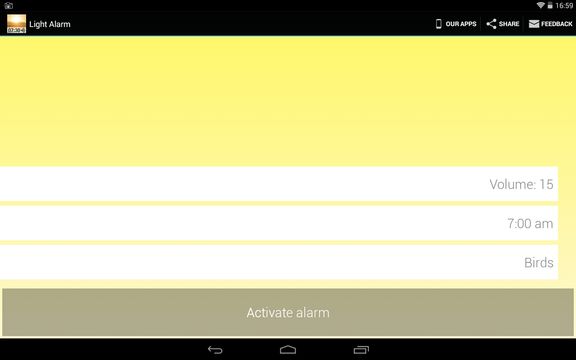 Light Alarm is a very simple when compared to the two previously mentioned wake up light alarm apps for Android. It only lets you setup 1 alarm at a time, but it does combine relaxing sounds to go with the screen powered wake up light, which is a nice added bonus.

This is it when it comes to setup. Just set the volume, time and alarm sound (from 7 relaxing sounds available). Drawback is that you need to run the app before locking the screen, so that it can turn on the screen when the time comes.

Also, have a look at Use Android LED Flash As Notification Light With Flash Blink App.

Glimmer and Light Alarm Clock are my favorites. In fact I didn’t even know that Glimmer existed and it might even be better than Light Alarm Clock which I currently use, so give Glimmer a spin first. Let me know if you woke up more easily with these wake up light alarm apps by leaving a comment down below.