Weed Killer is a free system cleaner application which you can use in order to have a computer system checked for any files and folders which might be aged, which weren’t accessed in a long time and which are no longer needed or used by either you or the system. With time Windows systems have been known to slow down, and aged files and folders are part of the reason why that happens, with Weed Killer you can help keep your system working faster. 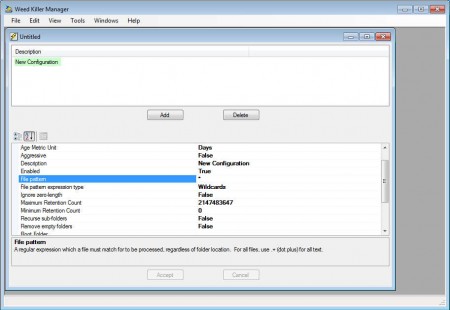 What you see above is pretty much everything that you will see from Weed Killer. This is the default interface where you can choose various different settings that Weed Killer will use in it’s quest for aged files and folders. Before you get to the Weed Killer settings, you will have to install the application. Tricky thing with installation would be choosing the correct install download. The main link on the home page offers the source version, which cannot work without some advanced compiling skills. Make sure that you find the installer version which offers the very familiar windows installer.

Weed Killer is not an application which you can see in action, it will actually work in the background after you make all the necessary configurations for file and folder detection, which ones will be detected and which ones won’t. This is done by playing around with various different search parameters, see the image below. 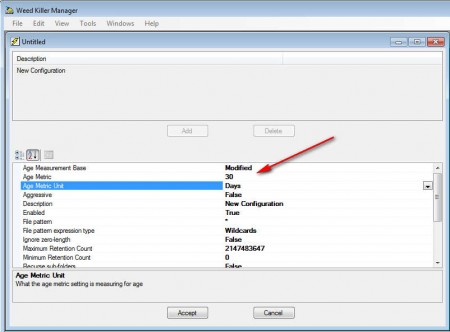 These settings here are where you can actually determine which files will be selected during the scan, and you can do that by entering the number of Age Metric Units that needs to pass before a file becomes regarded as junk and is deleted by Weed Killer. Age Metric is just a fancy way of saying the time frame after which the file is considered to be out dated. Other important portions of available scan parameters wold be:

and many more, like you can see from the image above. All of these program configurations are made in the Weed Killer Manager. Think of the manager as the configuration front end, which will only generate the necessary files for Weed Killer Worker, which is the actual app that does the cleaning. 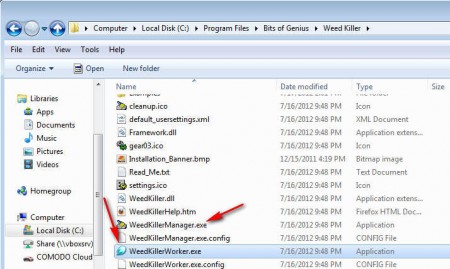 Weed Killer is intended more for cleaning large computer systems like the ones found in big companies. That’s why using it might seem a bit more confusing than what you would expect from a simple cleaning application. With Weed Killer expert can create the necessary configuration files, save them, and then simply pass it on to someone assigned for system maintenance to run the configuration and clean the entire system from old files and folders, junk and anything else that might have accumulated with time, all that for free, try Weed Killer and see how it goes.