This tutorial explains how you can open multiple files, folders, websites, and applications in one go.

You can create an executable file with the help of Windows Notepad that will open all those files, folders, URLs, and applications that you need frequently on daily basis or while starting up your work at office. It can be done by a very simple software known as ‘MultiFire‘, also known as SpiveyWorks MultiFire. You will be able to launch all needed applications simultaneously with the help of a text file that will be converted into an executable file at the time of saving the file. You simply need to provide the addresses of all needed items and need to save text file with multifire extension.

Although you can create a *.bat file that helps to open multiple files but that doesn’t work sometimes for some particular applications. Using Multifire, all your programs, files, folders, and other items will open correctly in one go.

How To Open Multiple Files, Applications, Programs Together Using MultiFire?

Here are the steps that will help you to create an executable file to launch multiple applications, files, and folders:

Step 1: Download and install MultiFire to your PC. It will be installed with the help of an installer. Its download link is present at the end of this review. Installer is ad-supported so you will be prompted to install extra tools during the installation process. You can decline installation of extra tools.

Step 2: Now go to the installation location of MultiFire and double-click its application file. It is just one time task only. By default, it will be installed in C drive where Windows installs mostly.

After executing MultiFire’s application file, you can create executable file using Notepad that will launch all needy items.

Step 3: Now simply open Windows Notepad and provide addresses of different files, folders, website URLs, and applications. Enter a single address in a single line. And do not leave any line blank otherwise at the time of execution, you will get an error. 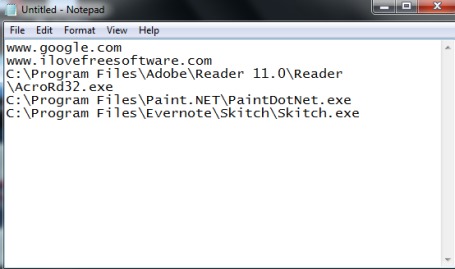 Step 4: Now you have to save this text file (not in *.txt format). Select any location where you want to save the executable file. Your desktop will be the most suitable location or you can select any other location. At the time of saving the file, give it any desired name, and add “.multifire” extension with its name. See the screenshot below: 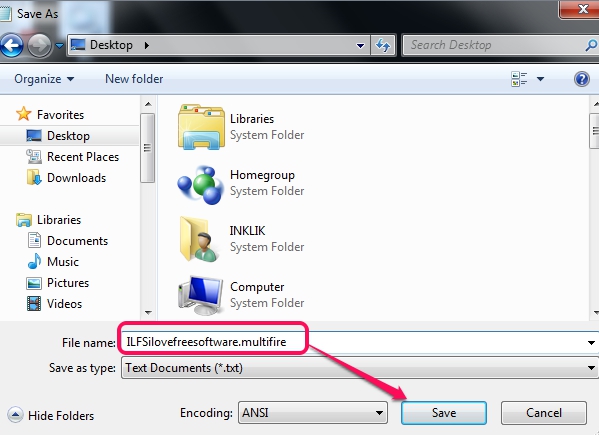 That’s all you have to do and your executable file will be saved. It will look similar, like visible in below screenshot: 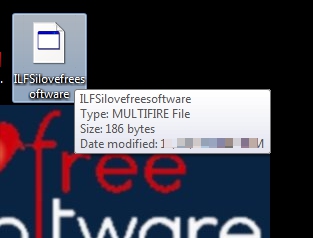 Now whenever you have to launch all your needy stuff, just double-click on the executable file created by you and all applications, files, folders will be opened in one go.

It’s a clever trick to launch multiple applications with MultiFire. It helps to setup working environment for you by launching items that you need most of the times in a day. You don’t need any third-party software that allows to first open their interface, add the programs, and then launch them. Create your own executable file using MultiFire and use it.

You may check these free software that provides GUI (Graphical User Interface) to launch applications in one go: AutoStarter, Instant File Opener, and AutoStarter X3.