inLightRadio is a free online radio station player which comes with a list of over 20,000 radio stations from around the world, and that’s just the beginning of the awesome list of features that inLightRadio has. Next to the free version there’s also an option for an upgrade where you get even more features, but not only that, you also get additional apps for playing media and a scheduler so that stations are changed automatically at specific times. 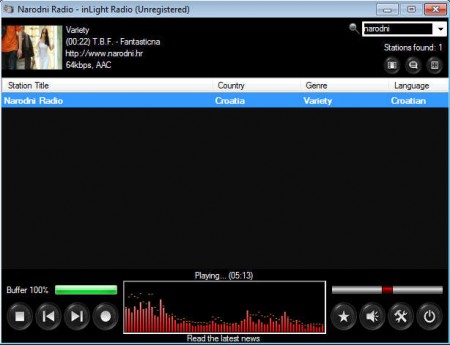 Interface of inLightRadio is very easy to use and understand. For the time being there are no skins available, but they should be implemented in the future versions. At the top of the radio window you can see information about the song which is currently playing, below that you have the song list, and all the way at the bottom you should be seeing the basic audio player controls. Some of the more interesting features found in inLightRadio free online radio player are:

Free version of this online radio player should be more than enough to majority of people. Paid version offers better quality audio and ability to edit radio station playlists directly online in the members area of the website. Daily station playlist updates are also available, among several other things. If you’re not to demanding, then the free version is the thing for you.

How to use inLightRadio – free online radio player

Decide wheter you want to download the portable version or the installer and in either case, run the application. That would be the first step, after you do that there should be a window very similar to this one. 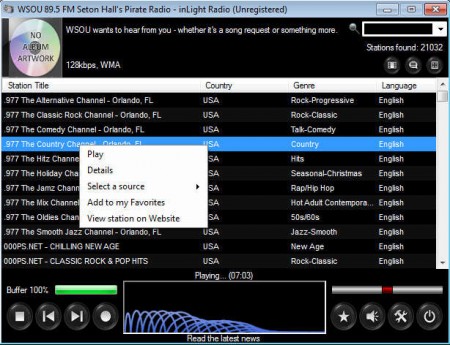 Now you should start going through the main list and search for the stations which might interest you. For example if you like rock you can list the station according to the genre and search for rock, or you can use the search function to look for rock stations, or the names of the stations that you already know. Chances are good that popular stations from your country are gonna be available in inLightRadio. Add the stations that you like to Favorites by right clicking and selecting Favorites. Open up favorites by clicking on the back star icon. 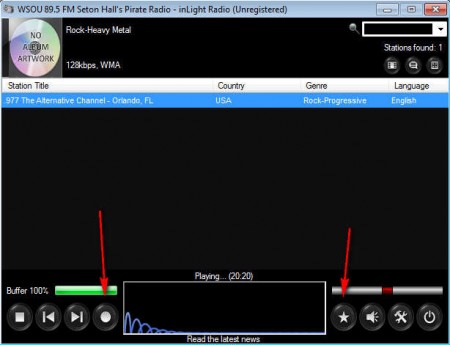 Click the record button in the left lower corner if you like what you hear on the radio. Recordings are gonna go to the programs files folder of inLightRadio, each station will have it’s own folder.

Listening to online radio in players like Winamp can be problematic because you have to enter URLs of the radio stations manually. Now with inLightRadio over 20,000 different radio stations are at your finger tips.