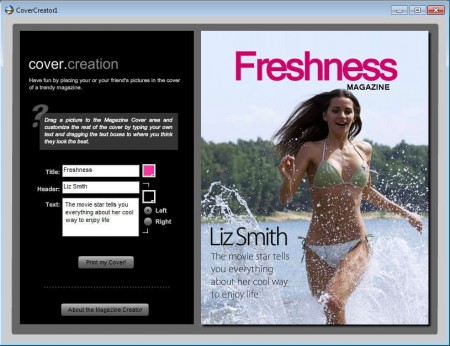 This is the default window which waits for you after you start Magazine Cover Creator for the first time. On the right you can see the default cover pic with some default text. Each one of these magazine elements can be edited, and you can easily create a cover with your face on it, to joke around with friends on Facebook for example.

All those who thought that Magazine Cover Creator is a legitimate application will be disappointed to find out that it’s actually just for joking around. You can come to that conclusion during application download, seeing how it’s only 200kb in size. Majority of professional cover editors will need to have at least a few megabytes in size, because they need to pack quite a number of tools and features. 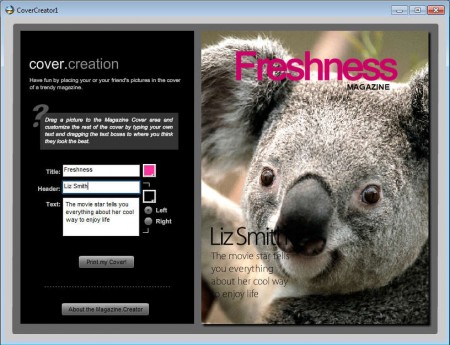 First step in creating your very own fake magazine cover would be to replace the default image of the pretty lady. We’ve decided to go with a koala, and we’ve added it by simply dragging and dropping it onto the Cover Creator work area. Image was automatically positioned with the koala in the center of the screen, which might mean that Magazine Cover Creator comes with automatic image alignment, but it could also just be a coincidence. 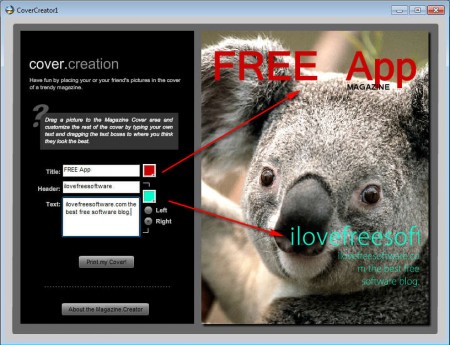 The last step in the creation of a fake magazine cover would be to change the text. On the image above we changed the magazine text, and also the title and trailing text of the main cover story. Other useful things that can be changed would be the text orientation and text color. With these options you can create very convincing fake magazine covers, where you can put photos of you or your friends, and then share it with everyone online and even offline.

With only the Print option available, all those interested in getting their hands on actual image which can be shared online might be a little bit tricky. One way of doing it would be by creating a screenshot of the created magazine, or to print the cover to a PDF document, which might be more problematic.

It’s a real shame that there’s no easy way of how to extract images from Magazine Cover Creator, because a lot of people would like to share their creation in digital form, on social networks. You can print the image and show off to your friends the old fashioned way of actually giving them a piece of paper with your fake magazine cover.

You can also check out postermywall for making free posters and collages.