Here is a list of 5 Best Free Spot the Difference Games for Android.  These Games test your skill of identifying the differences between two similar looking images. While in some of these games you have to find the differences between the images without any restriction of time, others let you perform limited attempts while the clock is ticking. You can get hints, and zoom in or out of the image to get some help as well. Ready? Okay! Go on and check out these games yourself, and spot the difference between them! ;)

And, in the meanwhile, you can take a look at this article if you want to check out similar games for your iPhone. 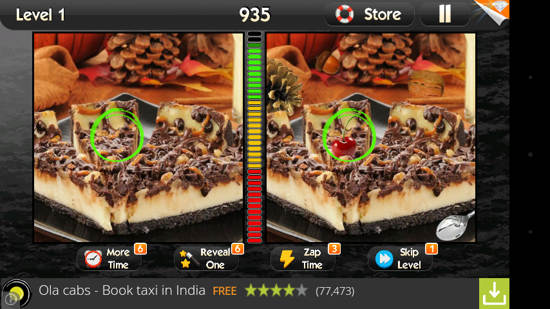 What’s the Difference is one of my favorite Spot the Difference games for Android. In What’s the Difference, you just have to observe the images and tap on whatever differences you find. Successful attempts will be marked with a green circle, and you will get extra time on the clock. Yep, there is a time counter on top and a points bar in between. The points bar fills up as you get more and more correct attempts, and the timer is topped up as well. Go ahead and give this free, ad-supported game a try from the Google Play Store. 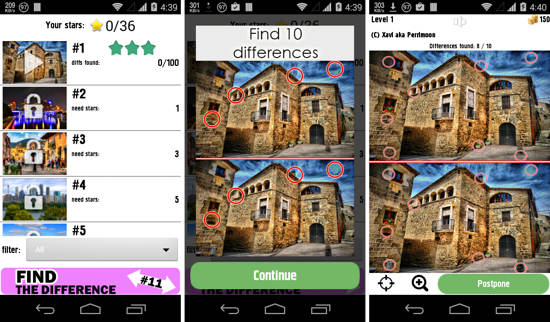 Spot the Difference is another game which has a rather simplistic approach to finding differences between a given set of two similar pictures. There are two icons near the bottom of the screen, one for seeing the hints, and another for Zooming in or out of the picture. For every hint that you see, you are charged 30 coins, but don’t worry, you’ll earn coins as you win more levels (25 coins, to be precise). Spot the Difference is ad-supported and available for free on the Google Play Store. 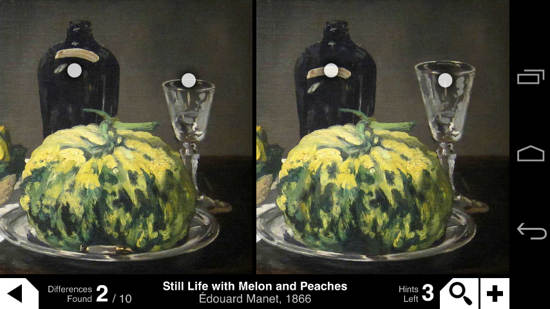 Broken Brush is a bit different from other Spot the Difference Games for Android. Broken Brush basically shows you two similar images of the same painting, and you have to find the differences between them. The name broken brush means that you are basically looking at the original painting, and another version which is not as perfect as the original. You get to use 3 hints in one game, after which you are all by yourself. Broken Brush responses nicely to touch, and has a sense of polish to it in terms of the in-game menus and other interface elements. You can get Broken Brush for free from the Google Play Store. 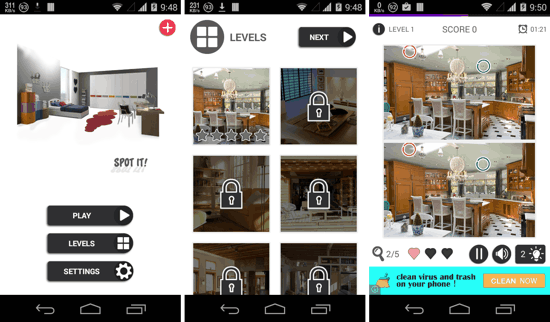 Find the Differences: Rooms is a great game from Find the Difference series of games from the developer. This game is comparatively tougher from the other ones here. Tap on a correct difference, and it will  be marked. But you have limited number of lives and hence you can only  afford to commit 3 mistakes in all. You can also use hints to make the game easier and complete it before the timer runs out. Head over to the Play Store, puzzle aficionados! 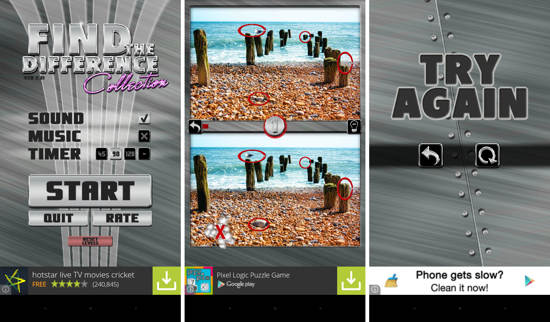 And here’s another gem among Spot the difference games for Android: Find Differences 2015 HD. This game has a neat design and certain animated elements as well! Start a game, and you will have a timer bar along with a bar which will decrease based on the number of incorrect attempts. When you run out of either of the two, you will have to try all over again. The game also has neat animations for every time that you tap correctly or incorrectly. Do note that Find Differences 2015 HD is ad-supported, and some of the apps might be more intrusive than you can bear. But the free tag does make up for it to an extent.

That’s all for now folks! This list of 5 Best Free Spot the Difference Games for Android is hereby complete. You can suggest other such games that you know of, in the comments section below.