Rogue Killer is a free rogue malware scanner for Windows which you can use to scan your computer for malicious processes; more precisely for any signs of rogue software, like for example fake antivirus, that might have infested your system. It can also fix other problems that usually accompany rogue antivirus infections, hosts file take overs, DNS changes, rootkits, master boot record changes, etc.

This free rogue malware scanner has a database of fake applications with which it’s gonna compare the ones that are found on your computer. List of potential threats and modifications that were made to the system will be listed in the bottom left corner. Controls for starting the scan, deleting found infections and applying all the fixes that we’ve mentioned in the introduction can be found in the right sidebar. 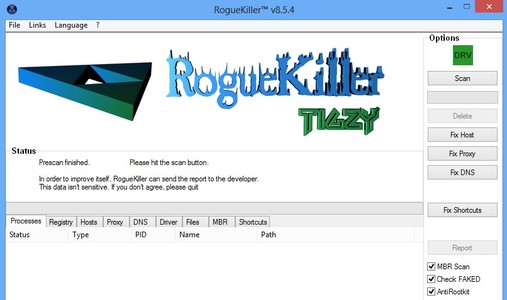 Rogue Killer won’t remove infected files, it only applies fixes that we mentioned in the feature list above. This means that it only prevents rogue malware infections from running. To remove actual files you should use third party rouge malware removal utilities, like: Malwarebytes Chameleon, Anvi Rescue Disc, TrendMicro Fake Antivirus Remover.

Scan start right away after running Rogue Killer. This is actually something called a pre-scan, which starts working right away to prevent rogue malware from shutting down this free fake antivirus scanner. 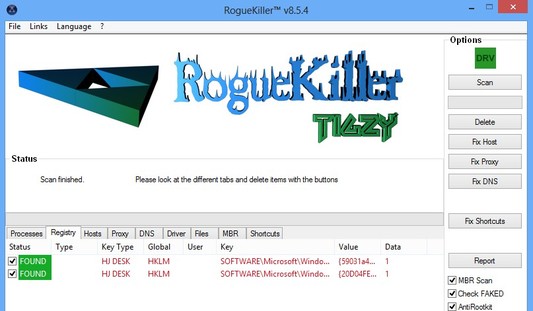 To run a full scan, you need to click on Scan in the right sidebar. It doesn’t take very long, and soon enough, if you’re unlucky, you should see infections listed in the bottom left corner. Use the tabs above the list to switch between various different infections types, process, registry, hosts file, DNS, etc. Once you’ve gone over the found infections, put a check mark next to the ones you want fixed, and click Delete from the right sidebar.

Right sidebar also allows you to fix individuals problems like hosts file blocking access to websites, DNS changes and proxies that are redirecting you everywhere except where you would like to go and so on. Click on the appropriate button, and problems should be fixed right away.

Rogue Killer is something that you should definitely try when having problems with rogue malware on your Windows system. You can go a long way with this free rogue malware scanner, fix a lot of issues caused by these types of infections and perhaps clean up your computer enough for the AV that you’ve using, the real one, to finish the job. Give it a try and see how it goes.