Prefab3D is a 3D modeling application that uses the open source Away3D engine in order to manipulate 3D models in a number of different ways. Since this 3D modeling software uses Away3D, all of the popular 3D model formats that can be opened by Away3D can also be opened in Prefab, which is a great thing for all those who are having problems that other software like Wings 3D, 3d video maker and anim8or are known to have with format compatibility. 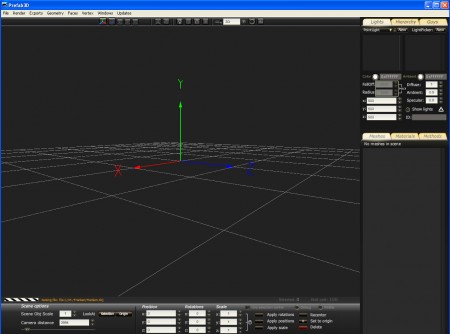 Image above is the default window that waits for you after you first open up Prefab3D. Interesting thing about Prefab is the fact installation file of it is less than 2MB, so those with slower internet connections and in need of a 3D software might want to look into Prefab3D. Adobe AIR runtime is needed to run this 3D application, make sure that it’s present on your computer before trying to install Prefab.

On the screenshot above you can see how very rich in options this little 3D application is. The most important part of the program would of course be the working area that’s located at the center of the program. This is where you can load your 3D models and start changing them after your own taste. List of file formats that is supported by Prefab3D and the Away3D engine that it uses is this:

Models can be changed the usual way, by either changing them directly in all three dimensions, changing the materials from which they’re made up of or my playing with lights, which will cause various different effects on the model and its surrounding environment. The official list of features that Prefab3D has would be this. 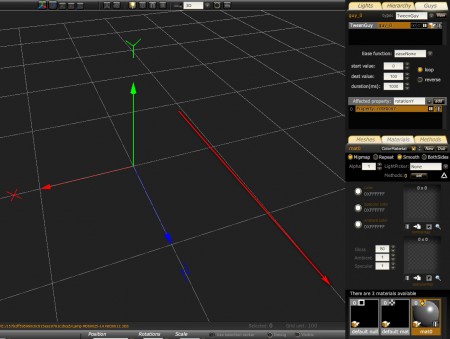 The central workspace is where the loaded 3D models will be placed, and then you can turn to the right side of the program where various editing tools are placed. On the image above we have an arrow that points to the Material Editor were you can determine what kind of surface objects will have.

Use Prefab3D for house decoration planing

One of the most popular uses of 3D software is without a doubt to have a preview of how a certain room or a house will look like with different furniture. Prefab3D can be used for this, start by visiting websites that hold 3D models of furniture add them to the program and start arranging things to get a better view of things and how space should be decorated. When you get enough practice with the program, you’ll be able to design your own objects for decoration.

Prefab3D also offers object rendering, files can be exported in several different formats, the most famous of which would be the previously mentioned AWD. For those who are not to demanding, Prefab3D is more than enough, try it and see how it goes.