Max Tray Player is a free taskbar audio player for Windows 10. This audio player basically supports taskbar playback controls. This allows you to control the music player from Windows 10 taskbar without opening its full interface. Although, the taskbar controls do not include all the controls from the interface, however it has controls like Play, Pause, Stop, Previous, Next etc for easily controlling the audio play. This audio player even provides direct option for media files in the playlist. This taskbar media player also displays the icon for opening the full interface of the audio player.

Like all good audio players, it also supports Shuffle, repeat, Audio Setting, Volume control, etc. You can also view the playlist in the full interface of the player.

Having an audio player with taskbar control is very helpful as you don’t have to open the full interface to play / pause audio files. And, Max Tray player is definitely is a great choice for taskbar audio player. 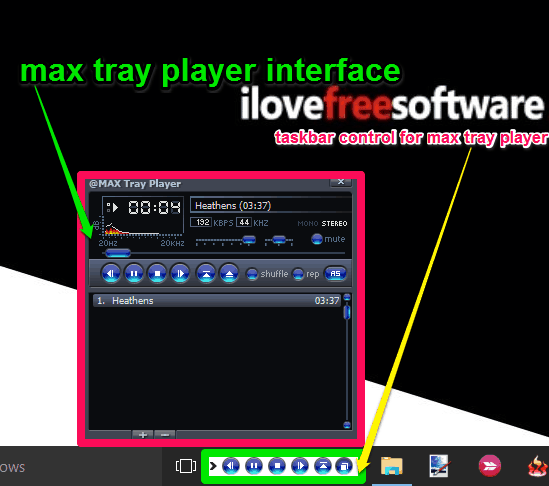 You can also try this Unique Audio Player with iPod Like 3D Interface, Very Fun to Use.

How To Add Taskbar Audio Player in Windows 10:

Do know that this audio player actually works with other versions of Windows as well, but I am particularly excited by the fact that it supports Windows 10 too. In fact, this is one of the few rare audio players that provide taskbar controls for Windows 10.

Max Tray Player is a very simple and useful taskbar audio player with support for taskbar controls. This software is a very light audio player as its application file is of less than 2 MB. It supports almost all the audio files like MP3, MP2, MIDI, WAV, OGG, FLAC, M4A, etc.

Once you have downloaded and installed the application, you don’t need to do much for using the taskbar control feature of this software, as it automatically attaches an audio player controller to the taskbar. And from there you can use it easily.

It has 6 buttons on the taskbar toolbar. They are Previous track, Play/Pause, Stop, Next Track, My Media, and Show Player. Out of the 6 buttons, 4 are used for controlling the audio being played. My Media displays the list of audio files being played. And Show player button simply opens the full interface of the Max Tray Player. 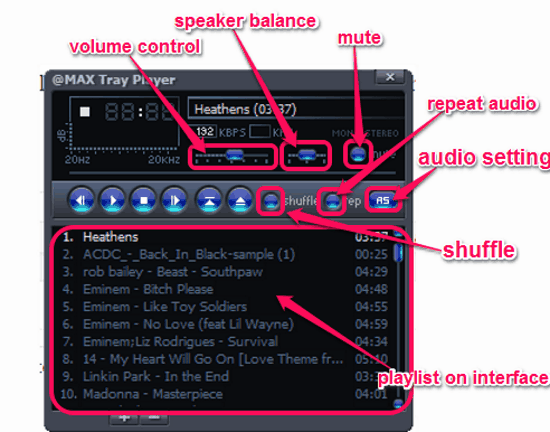 Other useful features of Max Tray player are as follows: