Red Bit Escape is a simple free game for iOS. The game features a red box which has to be saved from moving blue boxes without touching the boundaries. Your score is measured in terms of the time you have spent by surviving. The game is integrated with the game center and appears on the leaderboard as well. The game is very difficult to play so one can expect low scores. The music of the game is spooky which complements it properly.

There is nothing much to do in the game so one can grasp hold of it and become addicted to it very easily. Since the scores for the global winners are also available, it becomes very competitive at a point. 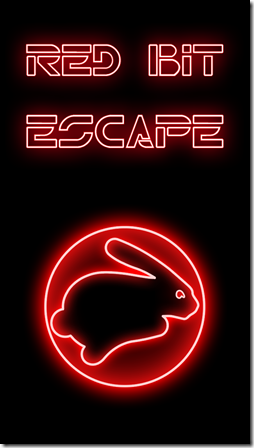 As mentioned earlier and as the name suggests, this game has a red coloured square which can be dragged anywhere within a limited boundary by you. You have to prevent touching the boundaries you are enclosed in. There are four other boxes in the same boundary demarcated by blue colour. Those boxes will run behind you too. You have to save yourself from that as well.

The game is all about judging the pattern in which blue boxes move so that you can know how to avoid them before hand. Also, you need to take care of the boundaries while doing that. One problem which is pretty common to come in your way while playing is that when you play with your thumb, it is likely to block the view of other boxes and there are chances that you may hit one of them.

One way to overcome this could be that you can play with your finger instead with phone lying down in one hand. That way, you can have the top view of the game and you will not face any problems while playing it. 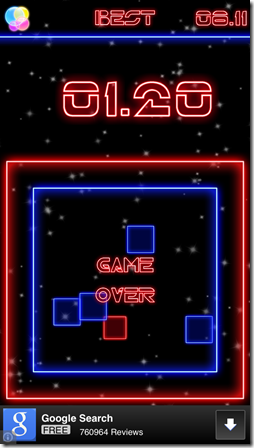 Since the game is pretty easy to grasp hold of, it can be addictive after a while. There were times when that feeling of breaking records was in me and I constantly played it for so long. Also, with the addition of game center, you can compete with your friends which gives one more reason to play that.

Red Bit Escape game for iPhone can be accessed from here.

You can also check out other iOS games reviewed by us like jigsaw puzzles, cats vs. aliens, hoppy frog, etc. which can be installed free on your iPhone and other iOS devices.