Cats Vs. Aliens is a free game for iPhone and iPad. It features a cat which uses slingshot to hit a group of aliens. Alien brains are surrounded by a group of smaller aliens which restrict the way to an alien’s brain. The cat dies or you loose as soon as a group of aliens touches the boundary of the slingshot. The music of the game is extremely addictive and hilarious. It totally complements the happenings in the game.

Also there is an ability to share your score on Facebook and Twitter. There is no game center integration which is a downside though. The score is measured in terms of the alien waves you have killed. 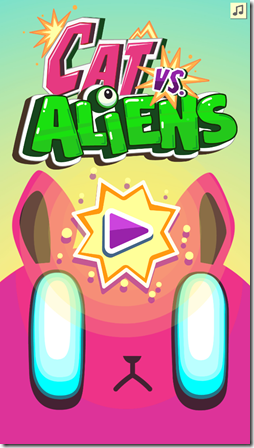 Game Play of Cats Vs Aliens:

Game Play of the Cats Vs Aliens is very simple which makes this game altogether more addictive. You have to target such that you can aim the brain right in the middle of a wave as soon as possible. The more time you take, the more distance wave will travel which in turn will increase your chances of getting defeated. Also, there is a bar on the top. You need to be quick in killing as many waves as possible to fill the bar. As soon as you complete the bar, your cat enters a super power mode in which it can shoot the balls even more quickly to get more combo points.

Apart from normal shots there is also an option of buying shots with more power. You are given a few Paws by default which can be spent to buy blue and red coloured shots. This is particularly named as a ‘Purricane’. It can wipe off a complete wave of aliens at once. 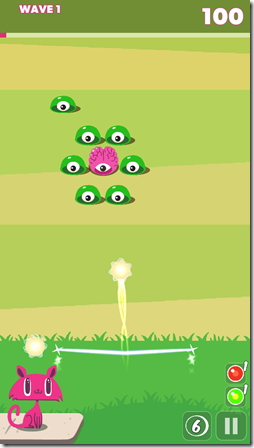 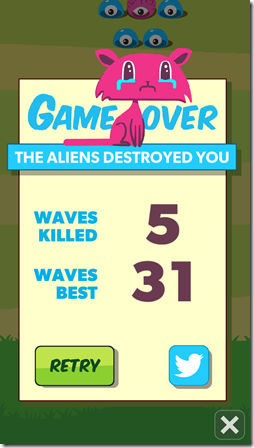 With some beautiful music and a good concept backing it up, game becomes quite hard to resist. Also, the ease of scoring makes it even more playable. One can easily get hooked to this game and play it for hours without getting tired.

Get Cats Vs. Aliens for iPhone, iPad free from here.

You can also check out other games reviewed by us like smash hit, disco zoo, hoppy frog from iTunes app store.