Hoppy Frog is a free game for iPhone and iPad. The game features a frog that has to hop from cloud to cloud passing some obstacles. The aim is to cover maximum distance while collecting golden flies in the way. The game tries to imitate 8-Bit games we all used to play as a child. The music and outlook of the game is similar to ‘Adventure Island’ game.

It is yet another attempt to touch the childhood chords of the user after the huge success of Flappy Bird. The graphics are deliberately kept low in quality in order to give a look and feel of the 8 bit games. 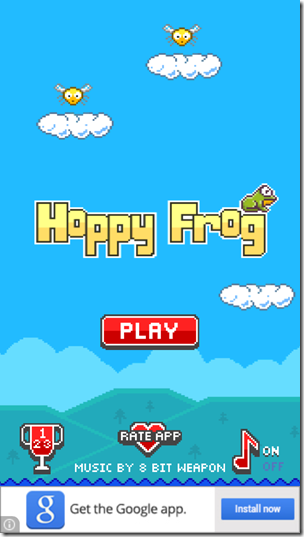 The Game Play of the application is pretty simple. You have to tap to jump from one cloud to another. If the distance between the clouds is very large you can double tap the frog and open a parachute which allows it to take a larger jump. There are two types of clouds. White clouds are fixed and can withstand the weight of the frog whereas grey clouds fall down as soon as you jump on them. Also there is a shark following you. If your position matches the shark’s position, the shark will jump to eat you. In other words, you do not have much time to think about your next jump. 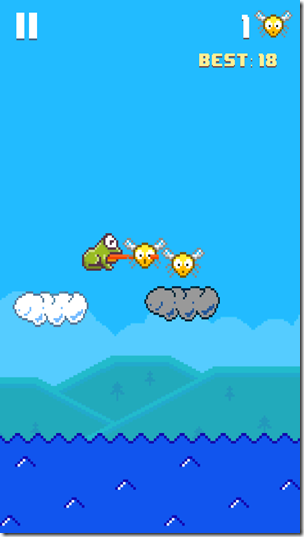 The music of the game is constantly highlighted in the app description on the app store and external link for its download is also provided. Personally I found the music very disturbing to the ears. The music can be turned off from the main menu but still application needs to work on the sound effects. The voice of the frog jumping and falling in water is not at all pleasant. If you are still interested in that music, get it by clicking here and the name of the track is ‘Drive Grinder’. 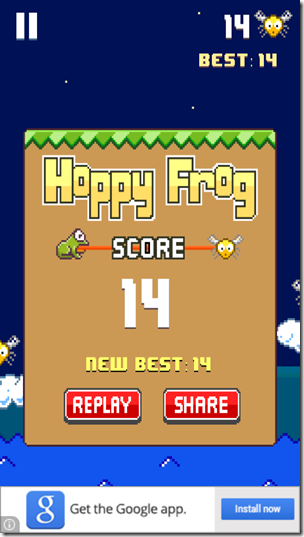 I personally was able to achieve a high score of 18 which was pretty difficult to reach. This shows that scoring pattern of the game will be similar to that of Flappy Bird. Also, the app description mentions some jumping electric eels, which were no where to be found till the score of 18. Play it and score more to know if there are any. The game switches between day and night modes as your score progresses. There is as usual, an option for sharing your score on Twitter, via mail and text message.

Unlike conventional games of this type, for a change, this game features a pause button. Now you can easily pause your game while something is distracting your attention. This is a huge plus point for frequent players. 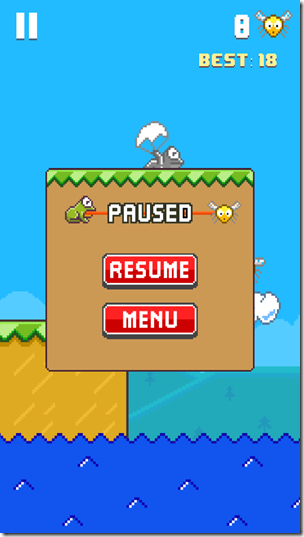 The game has all the components that takes it to make something addictive. You cannot stop playing as it seems that things are pretty simple but actually they aren’t. Only thing resistive about this game was music and its sound effects. They sure need to be rectified. Otherwise it is another fun game like ‘Flappy Bird’ which wants to make you break your phone when you are unable to score.

You can get Hoppy Frog for iPhone free from here.