Here’s a list of 5 habit tracker apps which you can use to help you keep track of when you decide to turn a bad habit into a good one. Spending too much time on Facebook, eating unhealthy food, not exercising regularly, smoking, procrastinating are just some of the bad habits we do each day. By keeping track of when you turn a new leaf, it could help motivate you to keep moving forward.

That’s what you can do with the following apps. 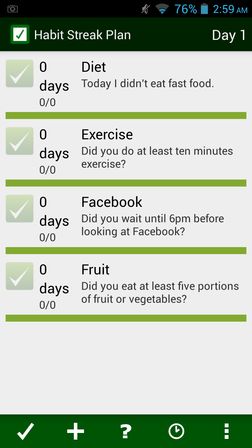 Habit Streak Plan is a habit tracker app which lets you setup all the various good habits that you’re trying to develop and then it keeps track of the number of days that has passed since you started.

This habit tracker app even has pre-made habits that you can add to the list. I added dieting, exercising, avoiding Facebook until the evening and eating fruit. As the days pass, zeros next to each habit will change. The bigger that number gets, the better off you’ll be. Reminder alarms are also available. 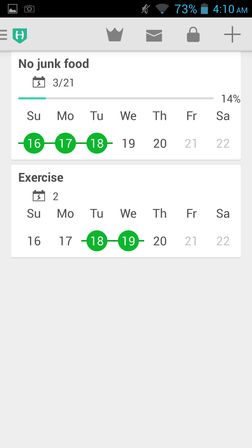 Habbits – Habit Tracker focuses more on graphical representations of the number of days it has been since you’ve started working on developing good habits.

Notice on the image above that I decided to cut down on eating junk food and I also decided to exercise regularly. Each one of these good habits has a chain of dates showed. When a day goes by and your good habit streak wasn’t broken, tap on the date to create a green chain of good habits. Habbits also has reminders, categories, descriptions and more.

Also have a look at 5 Free Weight Loss Apps for Android. 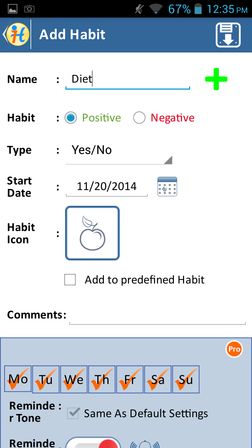 iPro Habit Tracker Free is an improved version of Habit Streak Plan, it’s basically like Habit Stream Plan, but with some additional features.

For example iPro Habit Tracker has an option to setup negative habit tracking by default. Additional habit counters are available, so it’s not only number of days that can be tracked, but also the number of times that you’ve performed a certain task/habit, for example. There are reminders for both to continue with the streak, and also when a certain goal is reached. 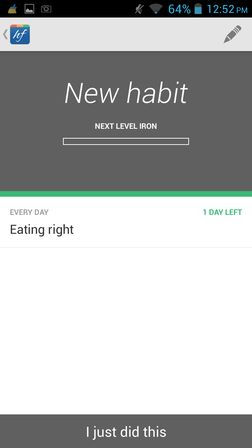 HabitFlow will entice you with rewards to keep certain habits. For example after an X amount of days have passed, and you keep true to your new habit, you’ll reach the Iron Level.

It’s possible to configure these rewards, change levels (number of days to reach them). This habit tracker app has sound notifications when milestones are reached. Widgets are also available.

Also have a look at Android Habit Tracker App to Track Habits: Habitbull. 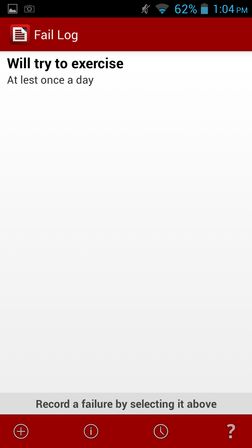 Fail Log is a habit tracker app that focuses on the negative. Here you setup habits that you want to do, and the app keeps track of the number of times that you failed.

This focuses on something along the lines of reversed psychology. You will see the number of times you’ve failed to keep a certain habit, and that will help keep you motivated. There are detailed stats available, to help you figure out when you fail the most.

From the habit tracker apps mentioned and tested in the list above, I’d like to recommend two. HabitFlow and Fail Log. Start with these two and if you don’t like them, tell me why in comments down below.