In this list, we talk about 4 free Bingo games for Windows 8. These games are absolutely fun to play and can be extremely useful in situations when you want to have a good time or when you are bored. Some of these games are multiplayer as well, so you can have the fun of playing these games with your friends as well. Overall, these games aren’t too heavy on size, and neither on your system memory.

These Bingo games can be downloaded for free from the Windows 8 App Store. And in case you are wondering if they are free, they are absolutely free, although some of these games are ad supported. So let’s move on and read more about how these games work. 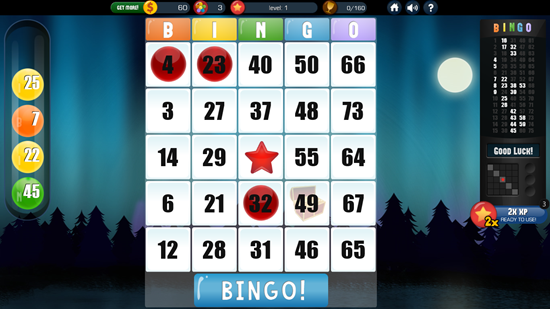 Absolute Bingo is a free Bingo game for Windows 8 that allows you to have a great Bingo experience. When you launch the app, you start off with $50 in your account. These dollars can be used to purchase Bingo tickets. When the app is launched, you are prompted to select the number of tickets with which you want to play. The available options are 1 ticket for $10, 2 tickets for $20, 3 tickets for $30 and 4 tickets for $40. Once the tickets are selected, you will be taken to the gameplay screen where the numbers will be called on the left side of the screen along with a voice prompt. Simply click on the numbers called which are present on your ticket and when 5 numbers have been eliminated in a row either vertically, horizontally or diagonally, click on the BINGO! button at the bottom of the screen to collect your reward money. If you run out of money, don’t worry, as more money is awarded every 4 hours. You can also purchase money using real money through the Windows 8 Store. 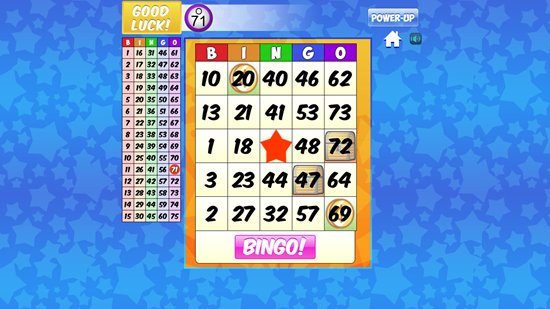 Bingo Heaven is another free Bingo game for Windows 8. When you launch the game, you will be asked to select a location where you want to play like Florida, California etc. These locations are nothing but levels where the tickets cost more and the winnings are more than usual. When you select a location, you can select the number of tickets you want to play with, i.e., 1, 2, 3 or 4. When that’s done, you will be taken to the gameplay screen where the numbers called will appear at the top and will be circled on the board at the left. You can cross check your numbers from the board at the left and when 5 numbers in a row have been eliminated, simply click on the BINGO! button at the bottom to claim your prize money. 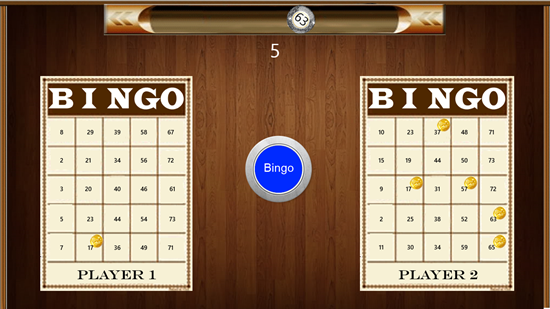 Bingo Pro is another free Bingo game for Windows 8 that allows you to play Bingo. When you launch the game, you will be presented with a very simple interface that shows 2 options- Play and How To Play. To play the game, click Play, select the difficult level from either Easy, Medium or Hard and choose your ticket. Once that’s done, the game will start and the numbers called will be shown in the tube like structure above. This game is a multiplayer in which you play against the computer. Once 5 numbers have been called, click on the Bingo button at the centre of the screen to claim your prize! 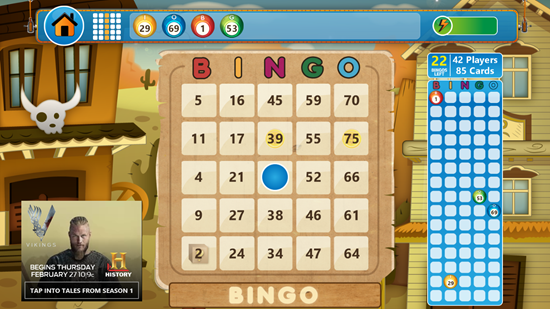 Bingo Star is a cool Bingo game app for Windows 8 that is actually an online app. When the game loads, you are connected to a large number of people who are online at that time and are playing Bingo. As you can see in my above screenshot, I am connected to 42 Players (see right side above the Bingo board where the called numbers are displayed). The numbers which are called appear at the top of the screen and you can eliminate (or circle) numbers on your card by clicking on them. Once 5 numbers are selected in a row, column or diagonally, you can click the BINGO button at the bottom of the screen to call your card, and hence claim your prize! You have to buy Bingo tickets and more credits can either be won by logging in to the app everyday or by winning the Bingo games.

So guys, this concludes my list of 4 free Bingo game apps for Windows 8 devices. Which one is your favorite? Do let me know!