Thing Translator is a free website that can identify any object using your phone’s camera, and then show its translation in different languages. You just need to open this website on your phone, allow it to access your phone camera, and then take photo of any object. It uses Google’s Cloud Vision to identify an object and then shows its name on the screen in your native language. Not only that, it also shows translation of that object in any other language of your choice.

So, if you are in some foreign land and don’t know what an object is called there in local language, just take photo of that object using this website, and you will immediately come to know its translation. 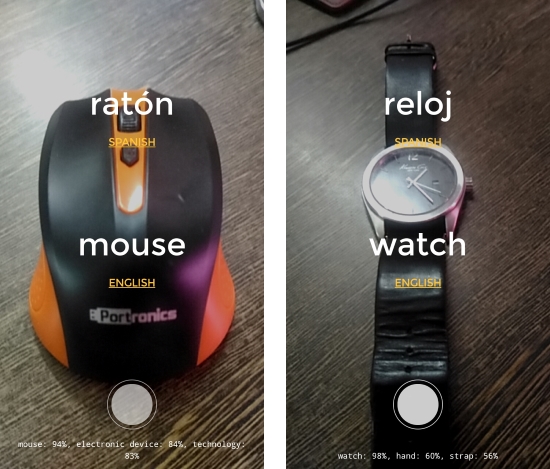 Do note that it is not always 100% correct, and in my testing, it showed some of the things incorrectly. But if I took a photo of them from a better angle, then it was able to recognize them correctly.

Also, if you are looking to translate text by taking its photo, then this website won’t do that; for that, there are OCR Apps with Language translation.

Thing Translator is actually an AI project, and they have made this sample website that demonstrates its power. You can access the homepage of the website here. They actually call it “demo” page. The entire code is on github (here), and you can also host it on your own.

Open this website on your phone (it doesn’t work on iOS yet). I tried it with my Android phone using Chrome browser. It immediately asked me for permission to open the phone camera. Once I granted the permission, it asked me to take photo of the object that I want to identify. I took photo of the object, and it immediately showed me the name of the object in English, and also its translation in Spanish. And both were correct. I tried with many objects and it was able to more or less identify them correctly.

The main purpose of this website is to help you identify objects and know their translation. As I mentioned above, by default it shows English and Spanish translations. However, both of them can be changed. Just click on name of the language to choose any language as your native language, and any other language as the language you want to translate into.

Do note that it does not shows accurate identification of the object. For example, if you take a photo of some food item, it might simply say “Food”, instead of telling exactly what food is it.

Also check out these tools to identify fonts on websites.

I had a lot of fun playing around with this website. First of all, I really like the fact that nothing is to be installed to use it. On top of that, there is no signup or login required. Just open the website, grant permission to use your phone camera, and start capturing photos of the objects.

I do wish that it came with some other options as well, like, keeping a history of the objects that I identified using this website, option to use some photo from gallery of my phone to identify object in photo, instead of always relying on phone camera to take photos, etc.

Nevertheless, its a pretty interesting website, and does well at what it claims to do.