This tutorial explains how to restore playing position and state of a file in Winamp. After following this tutorial, if you close media player while you are playing a media file, then when you open Winamp again, it will start playing the same file from the time it was playing earlier. Pretty cool, isn’t it!

Winamp is one of the oldest media players out there, but there are still many users who are in love with it. One of the best part of this media player is that it can be extended by plugins. And Time Restore And Autoplay is one such great plugin for Winamp.

Time Restore And Autoplay is a free plugin for Winamp, which as the name suggests, automatically restores playing position and state of a file between multiple uses of Winamp. If the Winamp player was paused before exit, then on starting Winamp, the pause state will be restored. With this plugin, Winamp can also automatically load with Windows startup and restore the playing position. You can also choose to play a random file on startup or even choose to play from the start of the playlist.

How To Automatically Restore Last Playing Position in Winamp?

Use the following steps to download this plugin and automatically restore, playing position in Winamp.

Step 1: First go to the plugin download page using the link provided at the end of this tutorial and tap on download option, then run the downloaded EXE file. It will open Time Restore & Autoplay Setup window where you need to select Winamp folder as destination folder. Step 2: After assigning destination folder, the plugin will be installed. Then you need to run Winamp and open Autoplay Options within Preferences to select Automatically start Winamp playing on startup and Restore playing position. 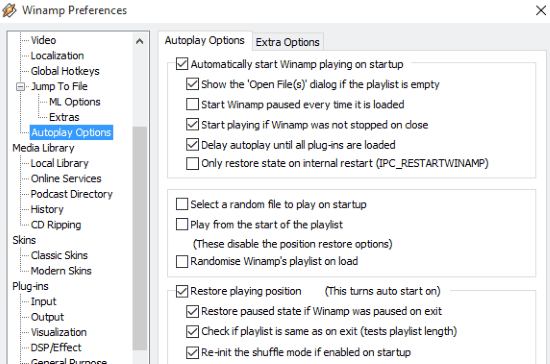 Step 3: Now open Extra Options from Autoplay Options and select Load Winamp when Windows startup (useful if you like to listen to your music or video files when your Windows starts up). Step 4: After selecting above options, your work is done. You can close the Preferences window and play your favorite files on Winamp and exit Winamp anytime, and when you start your Winamp player next time, it will start playing the same song and from same position, where you had exited.

Winamp player normally begins playing a file from the beginning on restarting rather than playing from where it had stopped. This tutorial will help you automatically restore playing file in Winamp from where it was exited. I will recommend this plugin to you, if you also face this problem.