Here’s a list of 5 shake lock Android apps which you can use to lock your Android device by simply shaking it. Apps mentioned down below will use your phones motion sensors to detect when you shake your phone. Shaking the phone will make locking your phones screen considerably easier because it won’t require you to look for the lock button on the sides of your device.

Here are some of the apps that I selected. 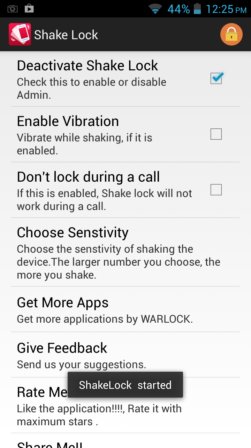 Before we begin it’s important to point that shake lock apps mentioned in this list can only be used to lock the screen. Unlocking the screen isn’t possible because of battery drainage and because you might accidentally turn on the screen when the phone is shaking in the pocket.

ShakeLock is a simple app which runs in the background and uses your phones sensors to check for signs of “shakes”. Sensitivity can be changed, and you can also turn on vibration so the phone vibrates when ShakeLock locks the screen. Entire app is small and very light on the resources, as are all the other shake lock Android apps that I covered here. 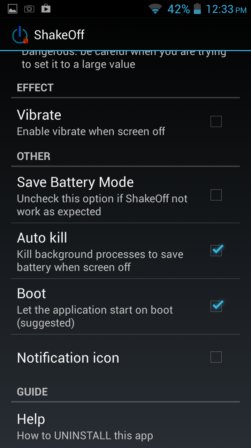 Shake – Screen Off works the same way that ShakeLock does, with the exception of it having additional options that allows the app to run on phone startup, there’s a notification icon, save battery mode (for some phones, in case the app isn’t working properly).

Vibration notification for when you close the screen using Shake is also available.

Get Shake – Screen Off.

Also have a look at Lock Android Screen With Shake Screen Off App. 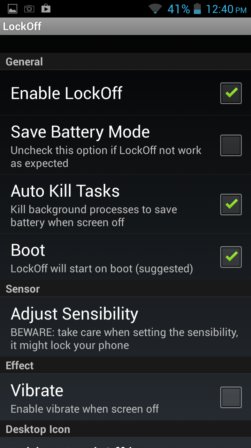 Shake To Lock Screen is a basically a mix of the two previously mentioned shake lock apps. Everything works as it should. When you run the app and activate the shake lock features, when the phone (or tablet) is shaken the screen will close.

To the mix of settings that Shake – Screen Off has sensitivity setting that ShakeLock also has, that’s why I mentioned that Shake To Lock Screen is mix of the two.

Get Shake To Lock Screen. 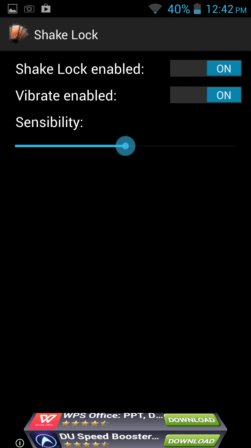 Shake Lock is much more simpler shake lock Android app, with just two settings that you can tweak, as it can be seen from the image above.

You can tweak the sensitivity of the sensor and you can enable vibration so that the phone vibrates when the screen is locked when closed with Shake Lock. It’s a much simpler app that has everything needed to lock the screen with a phone shake, and it’s simple to setup.

Also have a look at 5 Lock Screen Apps For Android. 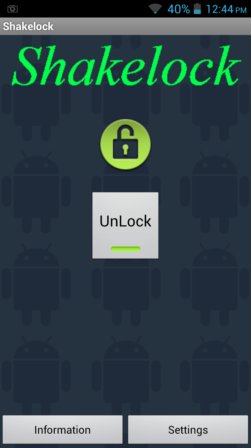 Even though it might seem that Shakelock has less settings than the previously mentioned Shake Lock, that’s not the case.

By tapping on the Configuration button you’ll be taken to a settings window where you can find all the same settings that the previous apps have. What makes Shakelock interesting is that it tries to unlock the screen using shakes, but it doesn’t work half the time.

My favorite from the list above is the Shake Lock by DuneDev. It’s simple to setup, lightweight and it gets the job done. Others are also available if you need something a bit more advanced. Try them all and let me know what you think in the comments down below.