Here’s a list of 5 audio CD creator software for Windows 10 which can be used to create audio CDs. Nowadays audio CDs have pretty much been abandoned in favor of MP3s, or the various music streaming services that exist out there. However, if you’re still attached to the availability of audio CDs (no need for internet to listen to music) and of course the sound quality, you will still be needing audio CD creator software.

Let’s have a look at what I was able to find. 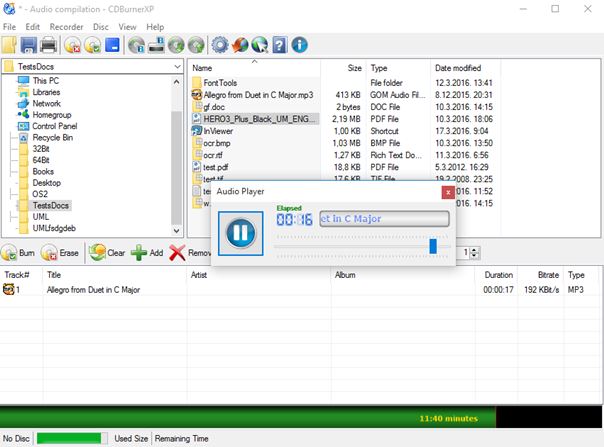 CDBurnerXP is a bit older audio CD creator software for Windows 10. Like you can probably guess from its name, it’s a disc burning utility from the glory days of Windows XP. Audio CDs are not the only type of optical media that CDBurnerXP supports. Data discs, video discs, ISO images and direct CD copy are also supported.

As far as audio CDs goes, they can be created from a wide range of audio files like WAV, MP3s, FLAC with or without gapless playback. Both 70min and 80min audio CDs are supported. To create an audio CD, first select “Audio CD” from the main menu. After that use the file browser to navigate to the music folder. Add files to the audio CD list down below with drag and drop. When finished use the “Burn” button to start the burn process. A useful feature of CDBurnerXP is the built-in audio player which let you preview songs before adding them to the audio CD. 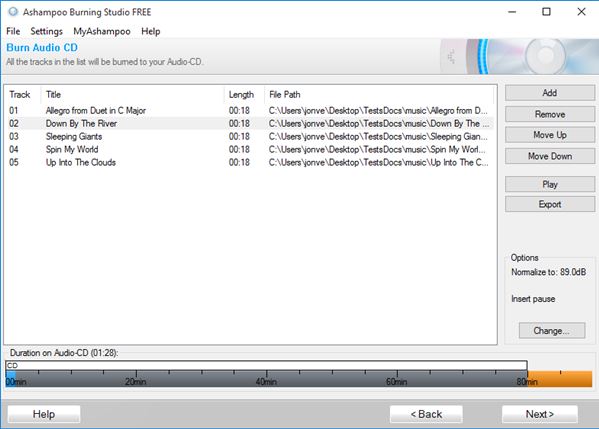 Ashampoo Burning Studio FREE is another multi-purpose audio CD creator software for Windows 10, which can do a whole lot more than just burn audio CDs. For example, existing CDs can also be ripped, using the “Rip Audio CD” tool.

First step in creating an audio CD using Ashampoo is to select “Music >> Create Audio CD”. Doing this will leave you with the audio CD creator pictured on the image above. Add songs using the “Add” button. “Play” button lets you preview the selected audio track. Gap between tracks can be configured using the “Insert pause” section. Ashampoo will automatically “normalize” tracks with different bitrates. Supported formats include WAV, MP3, OGG, FLAC, WMA and CDA. Progress bar at the bottom tells you how full the CD is. When you’re done, click “Next”, set the burn options (speed, burn type) and wait for Ashampoo to do its thing. 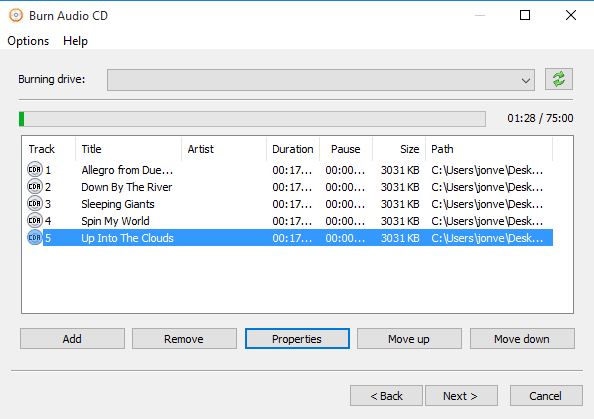 AnyBurn is an disc burning utility that rivals CDBurnerXP, but there are a few differences between the two. One more notable difference would be added support for Blu-ray discs, which can be found in AnyBurn, but not in CDBurnerXP. Like with all the other applications that I covered, lots of other types of optical media can be created (data discs, video discs, etc.).

Audio CDs are created the usual way. From the main menu select “Audio CD”. Audio CD creator found in AnyBurn is a bit more simplistic when compared to other audio CD creator software that I covered until now. There is no audio preview for example, and everything is more compact. On the up side, there are some AnyBurn specific features that can be found, like customizable track information (audio CD meta-data) and customizable gap between tracks, for each track individually. Supported formats include MP3, WMA, WAV, APE and FLAC. 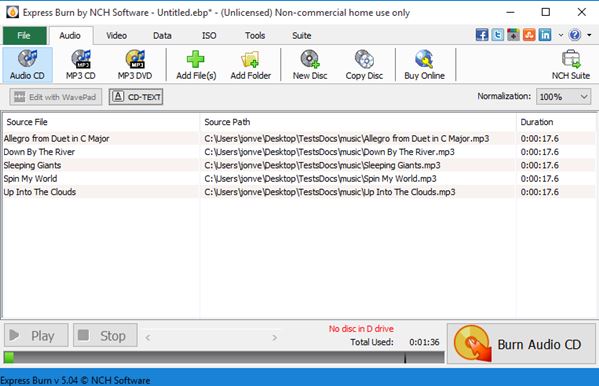 Express Burn Disc is the smallest audio CD creator software for Windows 10, and smallest disc burning software in general. Coming in at around 800KB, it supports CD, DVD and Blu-ray audio, MP3, video and data disc burning. After the initial launch you’ll be presented with a prompt for choosing the type of disc that you want to burn.

Setting up the audio CD is just like with all the other applications that I covered. Add the audio tracks that you want on your audio CD and hit the “Burn Audio CD” to start the burning process. Express Burn Disc has the longest list of supported audio formats. We’re talking over 35 different types of audio formats that’s supported, including all the usual like AAC, FLAC, MP3, WAV, etc. CD meta-data is editable, as is gap between tracks and the level of normalization (same as in Ashampoo). 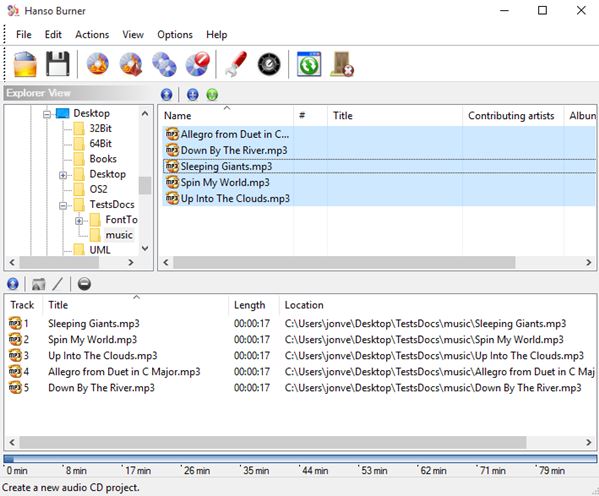 Hanso Burner is an audio CD creator software that reminds me a lot of CDBurnerXP. You can see why I’m saying that if you take a look at the image above. Next to audio CDs, Hanso can also be used to burn data CDs, data DVDs, video discs and it supports disc copying.

Upon launch you’ll need to select the type of disc that you want to burn. When creating audio CDs you need to open up your music folder using the built-in file browser and after that just drag and drop the songs you want to burn to the list down below. Unfortunately there is no built-in audio playback for previewing tracks. Song order can be changed using drag and drop. When you’re finished click the “Burn” button from the toolbar up top to create the setup audio CD. Be careful during install, because installer tries to install browser toolbars and other similar junk.

From the list of audio CD creator software for Windows 10 above, the ones that I liked the most are Express Burn Disc and Ashampoo Burning Studio FREE. First one is incredibly lightweight and easy to use, while the second one is more advanced. I have Ashampoo installed on my main rig and it works great. Let me know what you think by leaving a comment down below.