Nixie is a free WYSIWYM reader and viewer which you can use in order to open and read markup languages like Markdown. Application is very simple, so simple that there aren’t any kind of menus for you to use. Even though Markdown isn’t as famous as some other markup languages like HTML, you might still come across it sometimes, and in order to display the text written in Markdown, you need proper viewer software installed on your computer. 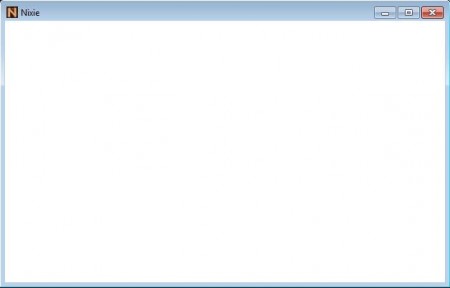 Like we said, interface of Nixie is very simple, this is what waits for you after clicking on the executable. There won’t be anything else for you to see. Make sure that you don’t assume that the application doesn’t work, like we initially concluded. This is how this free Markdown editor works, that white empty space is where the Markdown documents are gonna be opened.

For those who don’t know what WYSIWYM is, and what this acronym stands for. It means “What You See Is What You Mean”, or in other words this is not a graphical editor, it’s markup language where you use something similar to HTML tags in order to format the text being displayed. Here’s how you can use Nixie to display that text.

How to View and Read Markdown Markup Documents with Nixie?

The thing that confuses you the most is probably how do you open documents since there are no controls or any kind of menus. Drag and drop is the answer, you simply need to drag and drop the documents that you want to read and view and they are gonna open up in that empty white space. 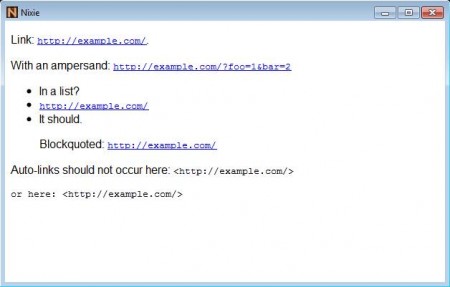 This is a sample Markdown document, and as you can see there are a lots of ways of how you can format documents with the help of it. Links can be added, lists and of course everything else that you expect from a text formating markup language. 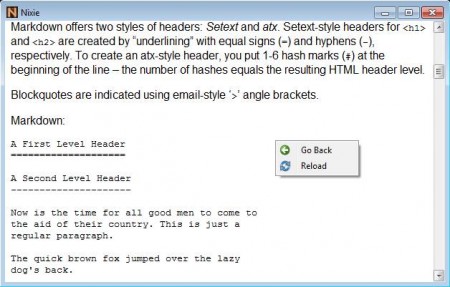 In order to be able to create these types of documents, which can be viewed and read by Nixie, you need to learn to some extent the Markdown syntax. We said that there aren’t any kind of menus, but that’s not entirely true, since when you right-click on the document you can reload the document if you’ve edited it, or you can Go Back to the previous document, if you’ve had any opened.

Nixie is a small and very lightweight Markdown markup language viewer and reader. If you have any Markdown document collections and you are looking for a quick and easy way of how you can open them and display the markup properly, then i would suggest you to use Nixie. Try this free application, and remember to drag and drop the files on to the empty white area. Download it free. Try out Pandoc and MarkDownPad reviewed by us.