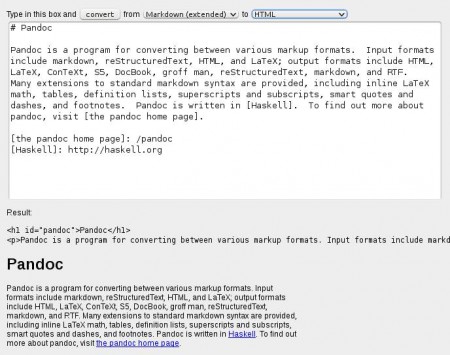 Image above is a screenshot of Markdown to HTML conversion, both of which are markup languages. The online version of Pandoc is easier to use because it involves mouse copy/pasting and mouse clicking basically. With the command line utility, which works on Windows, you’re gonna have to learn some basic commands used by Pandoc. You may also try I2rtf to convert Latex to rtf.

Converting markup formats is useful and it can save a lot of time, but it’s important that the markup of the input document is proper and without mistakes. Here are few pointers to help you get started with Pandoc.

How to Convert Markup Languages and Formats with Pandoc?

On the screenshot above you can see the online version of this free markup converter. Using it is very easy, just select the from and to markup types from the drop down menu and copy/paste the markup that you want converted into the text area. Click on Convert and you will be presented with the results. 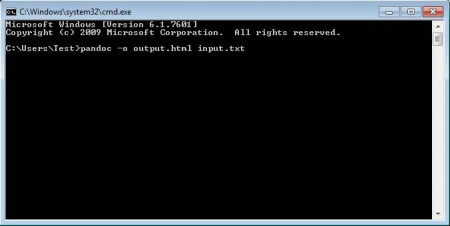 A very simple command for converting markup documents would be this:

Of course you have to adjust it to the file name, extension, and location of your documents. The most important part would be Pandoc command which will call up the actual application. You won’t see any kind of interface, only commands and info inside the command prompt will be listed. In the example above, input.txt is where whichever markup your want to convert, from the supported ones, will be. By giving the .html extension to output, we told Pandoc to convert to HTML. Command prompt is where you should be entering commands, and more options for the conversion can be found in the documentation which is provided with this free markup format converter.

Pandoc does its job as it should, although the lack of user interface might scare some users who are not used to command prompt. For smaller conversions try the online version of this free markup conversion utility. You can’t load files directly, you’ll have to copy and paste the markup that you want converted manually, but if you have small amounts of it, the online version would be the way to go. Both online application and the desktop command line tool are free, try them and see just how good they are. Click here to download Pandoc.