Hot on the heels of the recent launch of Carousel by Dropbox, Yahoo! updated its extremely popular photo/video sharing service Flickr’s mobile apps few hours ago. The latest update brings with itself a truckload of new features like real-time Instagram like filters, in-app editing tools, and Full HD video capture. You can also follow your favorite photographers’ work by subscribing to their photostreams, and of course you can share your own clicks. To top it all up, there’s obviously 1 TB of colossal storage to store every photo and video of yours.

But how good is it really? Head past the break to find out more!

How to Install and Setup Flickr App on iPhone:

The app’s installation is a pretty routine affair. If you don’t have Flickr installed on iOS or Android smartphone, you can simply go to the respective app store, search for Flickr, and install it. On the other hand, if you already have it installed, you can update it to the latest version 3.0 via the app store’s update section. Easy-peasy!

Once the app launches, the changes are immediately visible, with even the sign-in screen bearing a refreshed look. As you probably are aware, every Flickr account is tied in with a Yahoo! account, so if you don’t have it, now would be a good time to create one. Enter your Yahoo! ID and password, and you’re signed in to your Flickr account.

Once signed in, Flickr lets you connect your Facebook and Twitter accounts to find your friends who use the service as well. As you might’ve guessed, this is an optional step and thus can be skipped. Lastly, Flickr lets you turn the option to Automatically sync all your photos (the ones you already have in your smartphones and the ones you click) to your Flickr account on or off. Once everything’s set, simply tap Done on the top right corner. 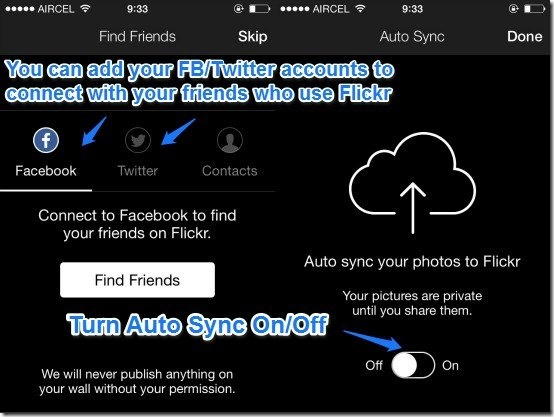 One look at the refreshed Flickr, and it instantly becomes clear how much time and effort Yahoo! has put into this update. The app is plain and simple, gorgeous, and in my opinion, is hands down the best photo sharing and photo backup app that I’ve ever seen. The UI is primarily divided into two sections that can be accessed via their respective icons at the bottom, at either sides of the in-app Camera icon in the middle. These are detailed below: 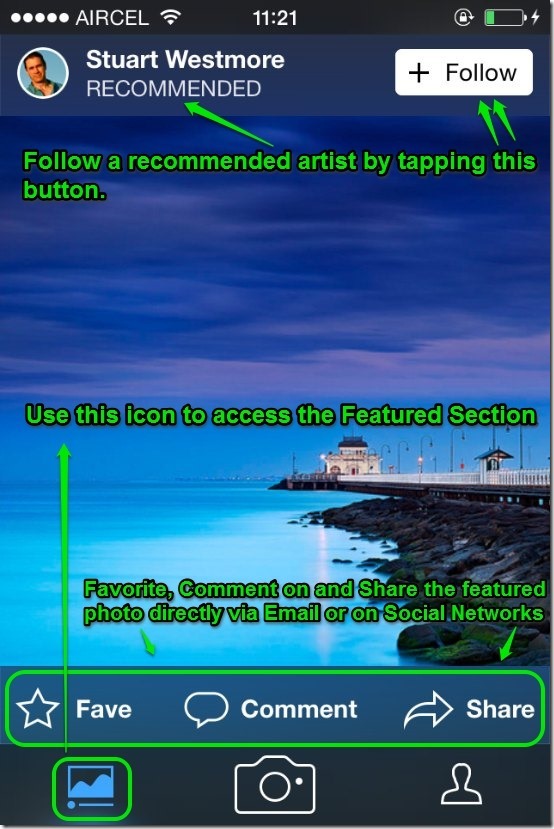 SECTION 2: The second major section, accessed via the bottom right icon lets you access your own photos, albums and view your own photostream in an equally visually stunning interface. This section is divided into four subsections, as mentioned below: 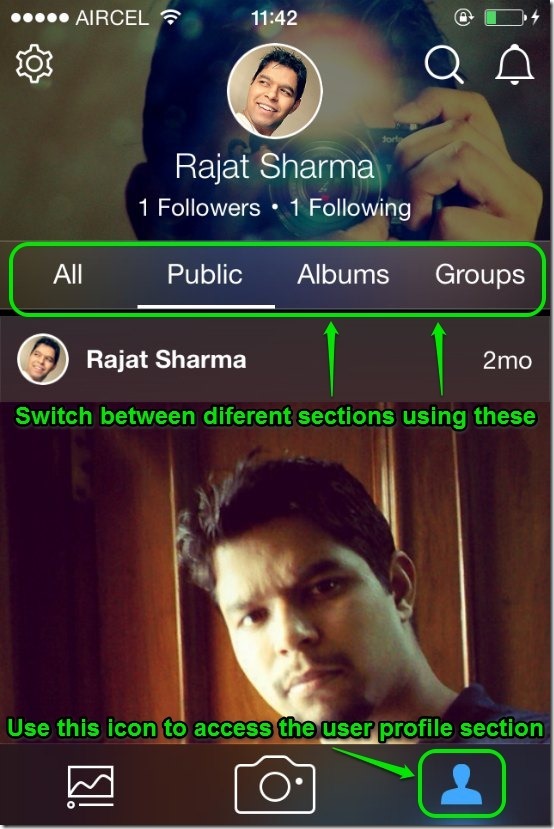 This is probably the highlight feature of the Flickr update. The In-app Camera section has been radically updated, and now offers a host of really cool Instagram like photo filters that can be used to alter the look of the photos you take or the videos you shoot in real time. The In-app Camera can be easily accessed via the big Camera icon that sits at the bottom, in the middle of the featured section and user profile section icons. The In-camera UI is really simple and intuitive. Check out the screenshot below: 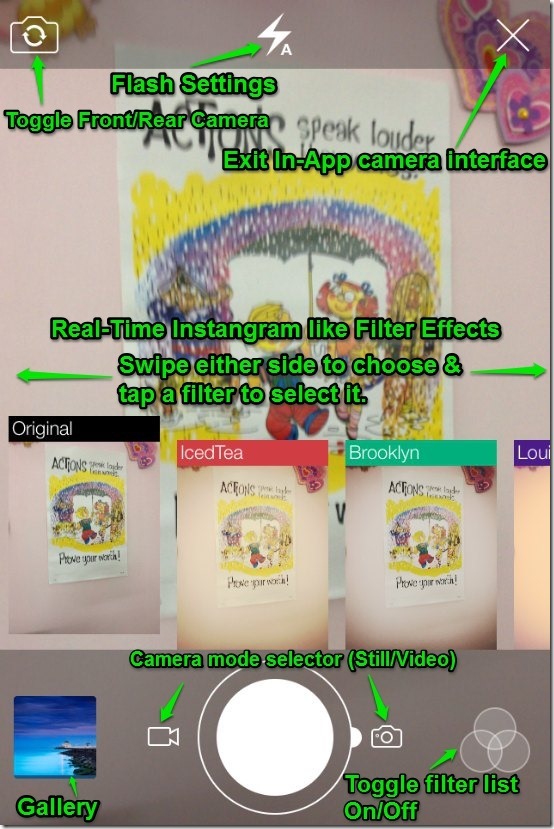 As illustrated by the above screenshot, the In-App camera Interface offers easy selection of real time filters. The mode selector lets you apply the same cool effects to your photos as well as videos. And with the capability to adjust flash and even toggle the front and rear shooters, Flickr 3.0’s In-App camera easily bests the stock camera app. Plus it looks insanely cool!

The reasons for this being a massive update for Flickr’s smartphone app (s) aren’t over yet. You can now easily adjust almost every aspect of your photos (Brightness, Contrast, White Balance etc.) with the built-in editing tools. All you have to do is click a photo via the In-App camera and it’s instantly ready for editing. There’s quite a collection of editing tools (conveniently accessed by their respective icons at the bottom) and each one lets you precisely refine every aspect of your photo(s). Check out the following combo screenshot: 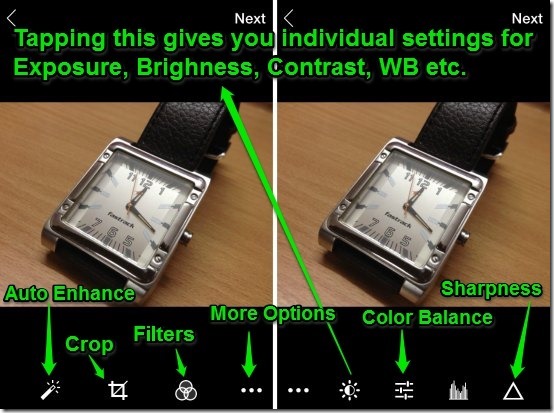 Pretty amazing, don’t you think? And you can customize every single one of these settings individually via sliders. Thus, Flickr app ensures that you get the perfect shot, and then lets you make it even better.

Viewing any photo’s EXIF metadata and other Information

Flickr’s latest update makes viewing your photos’ properties (privacy settings, album etc.) and EXIF metadata (Make and model of Camera used to take the photo, Shutter speed etc.) super easy and eye pleasing (Dawg, this thing looks dope!). All you have to do is tap on any photo whose attributes you want to check out, and then tap the little “I” icon at the bottom right. You can view the information about any publicly viewable photo the same way. Check out the screenshot below: 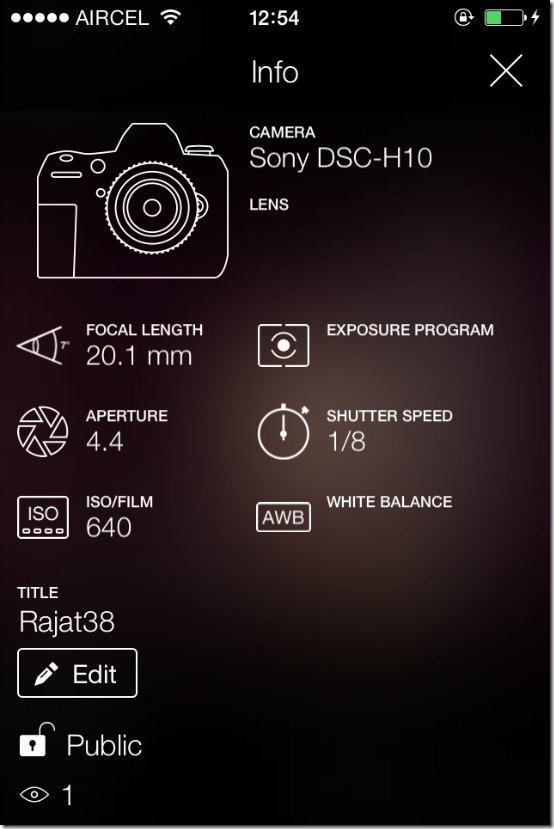 The settings menu can be accessed by clicking the small gear icon on the top left of your user profile. It lets you change a number of settings. These are briefly mentioned below: 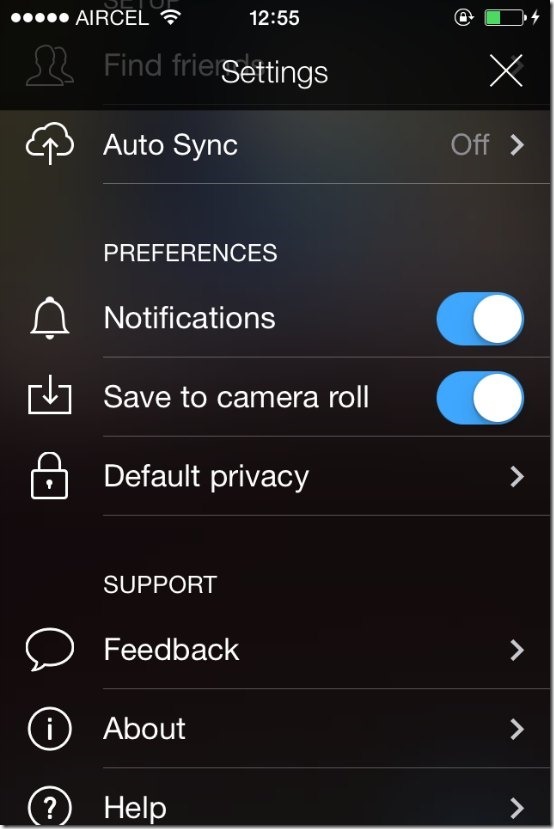 Flickr is a great service. It offers a ton of features completely free. And this is an extremely impressive update to Flickr that brings a ton of features, and looks simply great. With a whopping 1 TB of storage for all your photos and videos in original full resolution, Flickr is already a winner. But with this latest update to its mobile companion apps, there’s hardly any reason why shouldn’t be using this great service. So go clicking, and go uploading!