On top of this, the official app lets you manage all your photo albums and your Flickr contacts with ease on your iPhone. View all the uploads by your friends and family that are added on your Flickr account contact. 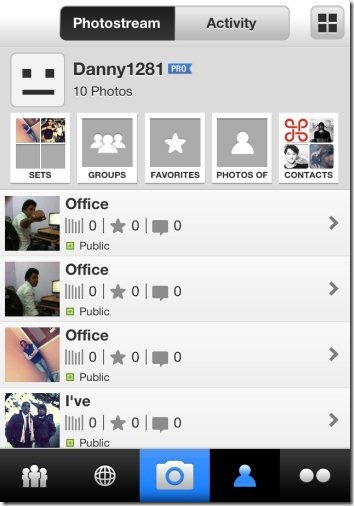 Flickr for iPhone is similar to Instagram app for iPhone. Both the apps let you upload photos, add effects to them, and then share your masterpiece with their community and with your other friends and family.

I really like the effects provided by this Flickr app for iPhone. As soon as you upload a new photo from your photo gallery or click a new image from your iPhone’s camera, Flickr allows you to add effects and then upload the same. Effects in the app include Panda, Chameleon, Mammoth, Ocelot, Wallaby, Aardvark, Iguana, Narwhal, Flamingo, Salamander, and much more. The good part of Flickr is that, it maintains the original quality of your image even after adding effects to them. The effects provided by the app are of high quality that keeps the resolution of your photos high. This itself is a good enough reason to ditch Instagram (if you have not already ditched it due to recent TOS fiasco).

Add Effects to Photos with Flick App for iPhone: 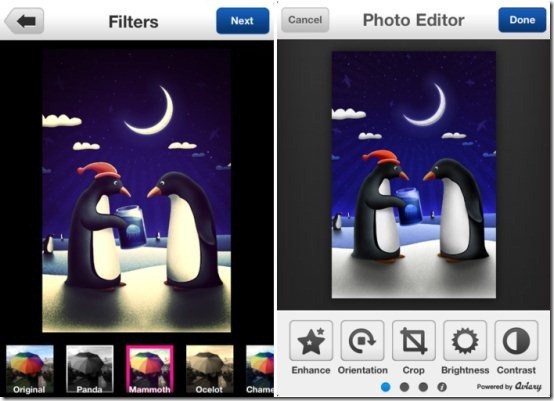 Flickr lets you add multiple photo effects. Apart from photo effects, you can also edit photos with multiple photo editing tools that include enhancing the image, orientation, crop the image, adjust the brightness, contrast, saturation, and sharpness. You can even draw, embed text, and reduce red eye effects. Whiten and Blemish effects are also good photo editor tools included in the app.

This iPhone Flickr app lets you upload photos to your Flickr account with ease. You can upload photos from your photo library or click a new image from your iPhone’s camera and upload the same to your Flickr gallery. To upload the photos to Flickr with this Flickr app for iPhone, just tap on the camera button at the middle. As you click in the camera button, the app enables your iPhone’s camera.  Click a new image or upload any image from the existing photo library. Now select the photo effect which you want to embed in the photo. You can even adjust the brightness, contrast, draw something on image, embed text, reduce red eye effect, and more. When you are don with all the photo editing part, just tap on “done” button to make the photo upload ready. Select the title, description, and select other advanced options to upload the image accordingly. As per the options selected, you can easily upload your photo to Flick community. You can even share the photos with your friends and family.

For Android users, check out Instagram app for Android  reviewed by us.

Check out photo sharing apps for iPad reviewed by us.

Download and install Flickr app on your iPhone from here. You can also scan the QR Code below and get the direct download link with ease. 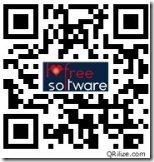 Official Flickr app makes it easy for you to upload photos to Flickr from iPhone. The feature of filters is really good and brings this app at par with Instagram, if not better than that.