Here’s a list of 4 Google Maps download software for Windows 10 which can be used to download Google Maps for offline use on Windows 10. Google Maps are hands down the best maps that exit out there. One small drawback that they have is that it’s not easy to use them offline. There are ways of doing it, but you will need additional tools and tricks. Applications from the list down below will let you take snapshots of maps for offline use, printing and anything else that you might need them for. Let’s see how exactly it is that these application work and what do they have to offer. 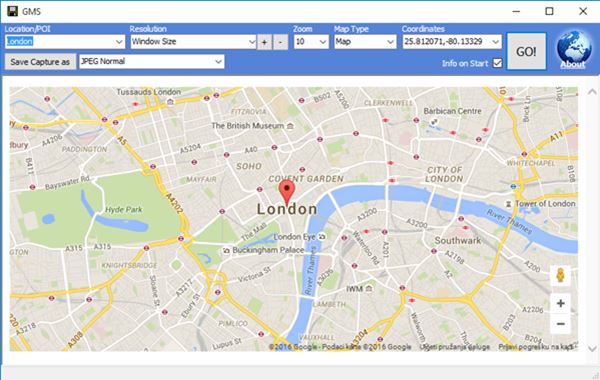 Google Maps Saver or GMS for short is a Google Maps download software for Windows 10 which works by taking snapshots of map locations that you have loaded into the built-in viewer. On the screenshot above I’ve loaded a map of London. How big of a map is going to be saved is determined by the window size, or you can alternatively select a custom image size up to 12000x12000px in size.

Before saving a map you first need to select a location (by typing in a city name or inputing coordinates), set zoom level and also choose map type. In the spirit of Google Maps, offline maps downloaded using GMS can be saved using either satellite imagery, terrain imagery, classic map layout (with roads) or you can opt out for a combo and use hybrid imagery. Supported formats include JPEG, PNG, BMP and TARGA file formats. 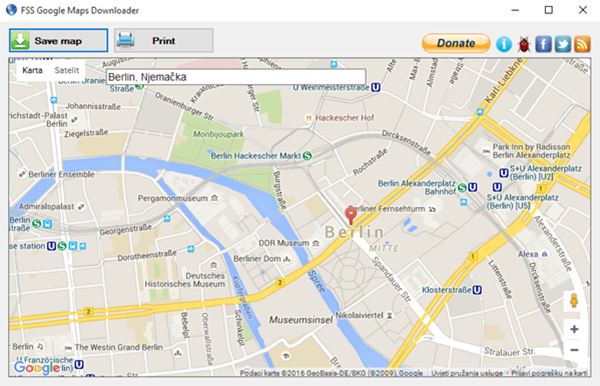 FSS Google Maps Downloader is a simple Google Maps download. It allows you to only save the current map view loaded into the built-in Google Maps viewer, see image above. All the controls are available at the top of the window.

First you’ll need to use the floating search box to find the location for which you want to save a map. Once that the map of the location is loaded into the view, all that’s left is to choose whether you want the map saved as an image or have it printed straight away from the application. Size of the map is determined by the size of the FSS Google Maps Downloaders window. For the biggest sized maps you’ll need to maximize the applications window. Images can be saved as JPEG or PNG.

Also have a look at How to Open Google My Maps in Google Maps Android App. 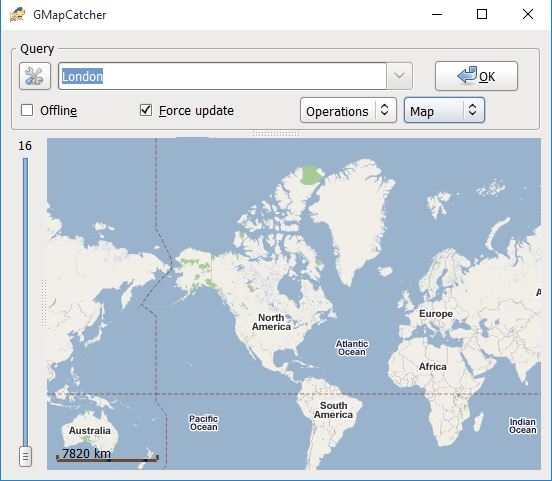 GMapCatcher is a more advanced Google Maps download software for Windows 10. It works with different map services next to Google Maps. Services like Yahoo Maps, OpenStreetMaps and Yandex are also supported. Having support for multiple maps isn’t the only thing that makes GMapCatcher stand out from all the other applications that I tested.

What I like about this Google Maps downloader is that you don’t just download image snapshots of maps, but rather you actually download regions of maps into the applications cache and then you can browse through the maps like you normally would, within the application, even when you’re not online. Click on the wrench icon to setup the map service, map location and the map size that you want to download. After that open up the main window and under the “Operations” drop down select “Download” to start downloading the map. After it’s downloaded, you’ll be able to put a checkmark next to the “Offline” option and browse the downloaded map sections offline. 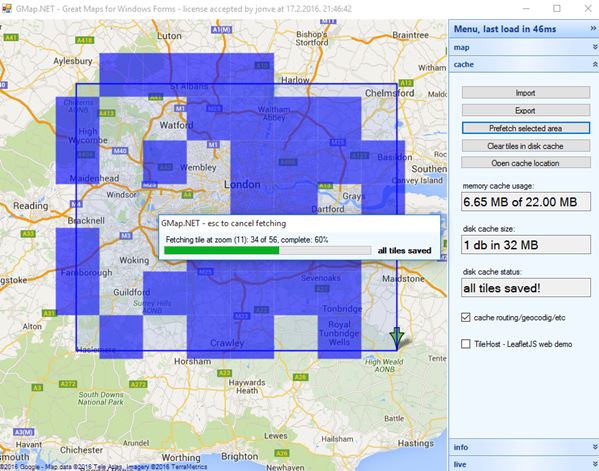 GMap.NET is one of the best Google Maps download software for Windows 10 that I tested. I’m saying that because next to Google Maps more than a dozen other online maps services are supported, including Mapquest, Bing Maps, Open Street Maps, NearMap and a bunch of others that I haven’t even heard of.

This software also isn’t just a map downloader. It has a lot of advanced features like routing (finding routes between point A and point B), directions and geocoding. What you see on the image above is me downloading Google Maps to the application cache for the greater London area. You will need to switch to the “Cache” section of the right sidebar. Use “Alt” + left mouse click (drag&drop) to select the area and then “Prefetch selected area”. App lets you use both cached maps and online maps at the same time, or you can only browse offline/online maps, depending on what your needs are.

Also have a look at 5 Google Maps Extensions For Chrome.