CoTweet is a widely used Twitter scheduling tool used by companies and other businesses to build and bridge gaps towards their costumers. It is considered as an early sign for the company by listening information about their products, its advantages and disadvantages from the client themselves. This means, companies can talk directly to the clients through twitter. By this, the sectors are alarmed about the performance whether it became better or it need to be improved. 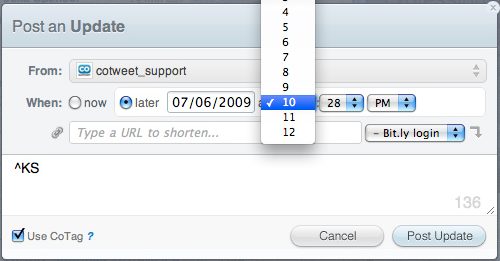 CoTweet lets you easily schedule tweets for future. You can pick exact date and time you want your tweet to go live.

Here are some other features of CoTweet:

You can try CoTweet here.

FutureTweets is a free software that allows scheduling for your tweeter tweets. It enables to send a tweet for the future or send recurring messages daily, the next day depending on your choice. In terms of birthdays, for instance, you will not be able again to forget the natal days of your twitter friends and followers by just simply scheduling it in FutureTweets. Just schedule important events or schedule tweets and this will be sent in the desired time you allotted. Use FutureTweets, schedule tweets on twitter and tell your friends about this good news. Try FutureTweets here.

Socialoomph is another free way to schedule tweets on twitter and to create future tweets.

Here are the base features:

Twuffer allows twitter users, followers and fans to schedule their tweets or future tweets and settle a time frame as to when this will be published. A twitter user designed Twuffer who is in need to schedule tweets both pre and post dated tweets. This has come to be a great help not only to establisher, however, to almost all users. 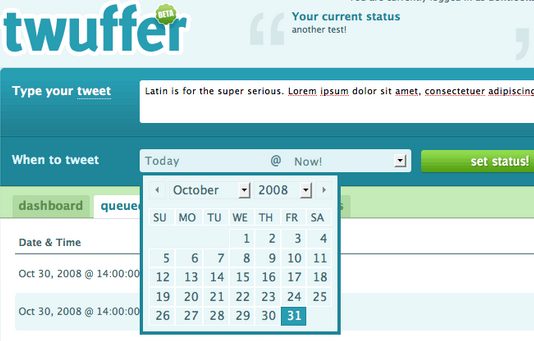 Here are some major features of Twuffer:

You can read more about Twuffer, or try Twuffer here.

Having a twitter account will immediately access you to Twaitter. Like any other software, it allows pre scheduling of activities allowing tweeting on the right time and right dates you allotted. Schedule tweets and future tweets are sent to friend on the convenient date you set on twitter. These are some of the uniquie features of Twaitter:

With the availability of free software to schedule tweets, people could still be connected even though they are not anymore on line. They could still send instant tweets to birthday celebrants, special events, schedule tweets on the calendar and create any future tweets even they are surrounded with busy tasks.