Console Vault is a free command line file encryption software for Windows. It doesn’t have a graphical interface. When clicking on the executable all that you’re going to see is a command line window with instructions on how to encrypt and decrypt files. You can issue simple commands to encrypt and password protect files in one go, and decrypt files.

Command Vault can also calculate various different file hashes, like for example MD5 or SHA. This command line file encryption software is easy to use, and all the commands that are required are neatly displayed on the interface as soon as you start the program. 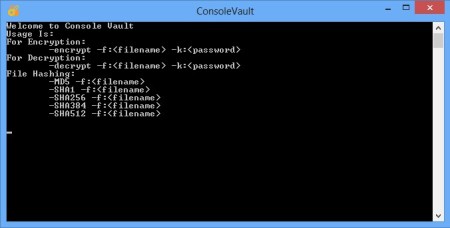 Commands that you see on the screenshot above are what you need to type into the command line in order to encrypt, decrypt or to calculate hash values listed above. This free command line encryption software is open source. Archive that you download actually has the source files, the entire project. Don’t let this confuse you, just navigate to the Debug folder inside the “bin” directory and there you should be able to find the executable.

Files that are encrypted will be saved using CVF format, which is the format of Console Vault. It’s very important to note that the file that’s being encrypted isn’t removed, the encrypted file is created anew. Without removing the original, it can still be accessed by intruders, so make sure that you delete it when you’re finished with encryption.

The only thing that you need to do, after clicking on the executable, is read with understanding the instructions that are laid out for you about how to initiate file encryption, how the command should be pieced together.

Example of a command that you need to run in order to encrypt a text document on the desktop is this. The lower case f and k preceded with a hyphen are there to signal the file location, for f and the password for k. 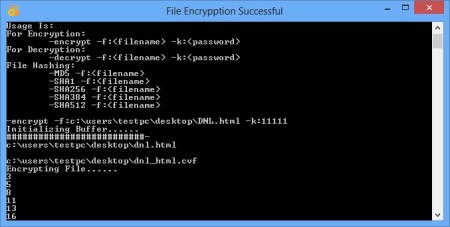 Encrypted file is created in the same directory where the original was. How long the encryption takes depending on the size of the file that’s being encrypted. Notice the numbers near the end of the screenshot, you’ll be able to keep track of the encryption process, numbers will pop out as it goes along.

Command for extracting encrypted documents is the same as the one for encryption. The only difference is of course that you need to point to the encrypted file instead of the original.

To some the fact that this is a command line file encryption software might cause them not to use it, but there will always be those who are more comfortable with the command line. Usage isn’t overly complicated, commands are easily understood. Just make sure that you go over the instructions carefully when reading what Console Vault spouts out initially, so that you don’t forget to add a colon or a hyphen somewhere. Free download.