ZenOk is a free antivirus which protects your computer or Netbook from different types of malware and spyware. ZenOk is a complete solution for all your computer security needs. It comes with heuristic detection technologies that detects zero day viruses based on their suspicious behavior. It also comes with an ultra-light scan engine that consumes just 0.1% of your system resources which continously scans files for malicious software. ZenOk also comes with a built-in online backup feature, but that feature is not free.

ZenOk has a simple interface and very convenient to use antivirus, also comes with great features. It claims that it is five years ahead of any other antivirus, but does not explains what that really means and what additional stuff it brings to the table as compared to other free/paid antivirus software already available. 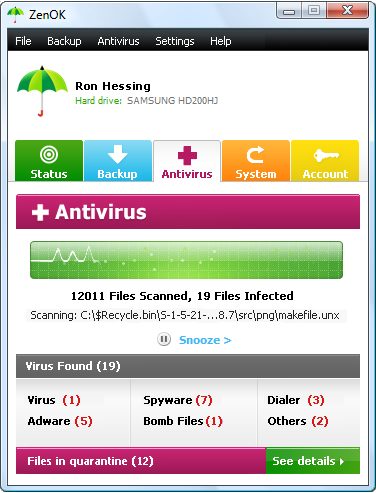 ZenOk continuously scans all your documents like pictures, Videos, Songs and other files for any type of virus or spyware activity, detects it and remove it from your system thereby securing your system for vulnerable programs.

Now lets talk about one of the amazing function of ZenOk its “Legendary online backup service”. ZenOk automatically uploads all your important documents like videos, music, official documents and many more real time to its server which is secured thereby giving you another advantage as you will never miss a file when ZenOk is there with you. Thats not all ZenOk also keeps your file updated i.e. whenever you create a new file or change an existing file on your netbook or PC. However, as I said earlier, this feature unfortunately is not free. It would have been great if there was a free account also with < 5GB of free online storage. If you are like me and do not want to spend money on online backup, you can stick with dropbox, or dropbox alternatives.

What I really liked about ZenOK free antivirus is its focus on real time protection, protecting users from threats from internet (which makes sense, as that’s where most of the threats come from), and keeping it light on system resources.

ZenOK free antivirus is very new, so I would wait for some comparative tests of this free antivirus as compared to the already established ones, like, AVG Free Antivirus, Microsoft Security Essentials, and Avira.

Also, I did not see any cloud based detection capabilities in this, like Panda Cloud Antivirus offers.