Synkron is a free folder sync software that allows you to sync files and sync folders on your computer. The free folder sync software is design to also allow you to sync data between two different locations. Clearly Synkron is one of the best folder sync software applications for a long time. Some of this freeware’s  features include scheduling sync tasks, supporting incremental synchronization, applying filters and so forth, Synkron is also able to sync hidden files and folders between different locations. The ‘Multisync’ option, allows the backing up of data from multiple sources and saving it to one targeted location. There are also “propagate deletion” and “Detect Collisions” options also.

Synkron free folder sync software also allows the user to create their own ‘Blacklist’ of folders, files and file extensions that will not be included in the folder sync process. This means, you are able to decide which files, folders, directories, etc you want to be synced. Synkron allows you to sync folders, sync files simply without having to go through a long, detailed process. Indeed this folder sync software was designed and created to be user friendly. 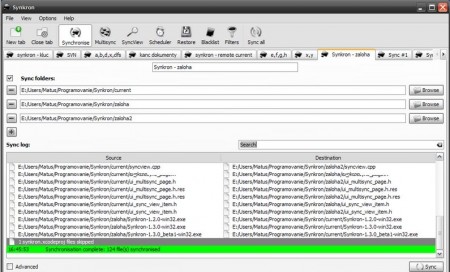 The program’s interface is easily navigated and thus, easy to use. Once on the main screen simply specify source and target folders that you want to be synced. Prior to using this free folder sync software, the creators advise users to ‘analyze’ the sync process by clicking on the “Analyze” button and viewing the files and folders which are to be synced. You will be able to view directory listings with information not found under the folder column.

Some other folder sync software we reviewed earlier include CarbonFolder, FreeFileSync, and Bamboo File Sync. Also check out how to sync files between Windows and Linux computers.

The multisync option can be performed by a similar method, you only need to specify a list of source folders and one destination folder for folder syncing. There is no limit to the amount of folders you are able to sync. The amount of time it takes to complete syncing a list of folders, depends on the target location – whether local or remote – as well as the amount of data. Multisync analysis is performed by choosing one particular folder. The analyzing of data from multiple folders is no possible.

From the pull-down  options list, you are able to create the aforementioned “blacklist”, detect collisions – which is the detection of updated data from both locations,  propagate deletions – these are deletions made purposely by the user from one of the synced folders and also be able to see and make use of other basic synchronization methods and options.

There is also a portable version of Synkron. Synkron is available for Windows, Mac and Linux operating systems.