Bamboo File Sync is free backup software and free folder synchronization software that enables you to synchronize files scattered in your system and takes automatic backup of the files in different storage media. It integrates with Windows Explorer to define the folder pairs that you want to sync. And you can save your choices once, and just use them daily. If you want to copy or backup lot of files, you can schedule the copy process to happen in off-peak hours so that it does not slows down your computer.

Some other file sync software that we reviewed earlier include file synchronization software, Microsoft Sync, and Windows to Linux Sync. 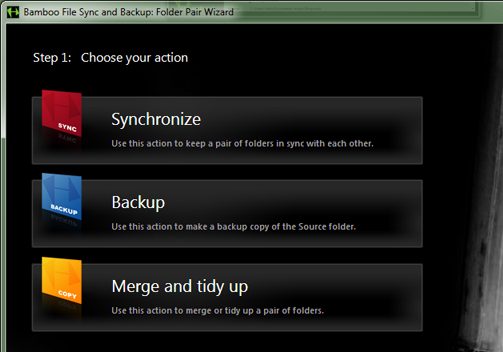 We all have numerous files in our system having similar name or use but we sometimes forget as which version of file belongs to whom? Most often files that we have in our system and same files are in USB flash drives, other hard disk, office machines and laptops. And when we try to take back up of the files we face problems as to which were updated latest and tend to mistake them with wrongly updated files.

With this handy tool you will forget to confuse yourself with complex backup actions and sync process. The program itself recognizes the modifications done in the file and determines as to which file is latest one in desktop or in USB and makes all backup tasks easy for you.

Here are some of the features of Bamboo File Sync:

The Bamboo File Sync freeware is designed to automate your file synchronization process and leaves you relaxed and focused on other important things. Now the copying task becomes easy and simple. The software is ready to go types, and it unplugs the media from PC or shutdown/hibernate your laptop when your work is done. It supports all media storage from computers and laptops to flash drives, MP3 players and cell phones. If you want to keep file in sync between different computers, you can use Dropbox, or Dropbox alternatives.