Obama VS Romney, is a free Windows 8 game app. It’s simple and fiction game app, that makes a comic on Obama and Romney. The gameplay of this Windows 8 game app is based on the 2012 elections between Obama and Romney. Obama and Romney have decided to take their fight outside the White House and duel using funny spud guns, till there’ll be only one man standing. The person who wins the fight wins the elections. You’ll get multiple types of bonus during the gameplay, that you can use and throw on the opponent using the spud gun. 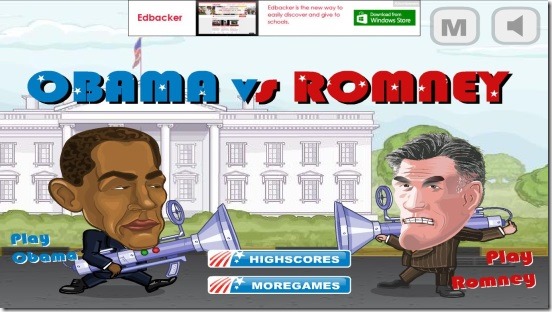 It’s a lightweight game app for Windows 8 users that, you can play during your holiday season and kill some free time. The game is supported in all Windows 8 devices.

The game is a very simple Windows 8 game app. If you have played Pocket Tanks, earlier than you’ll find this game very similar. The only difference is in place of tanks you’ll get Obama and Romney fighting against each other, and in place of rockets and bombs, you’ll fire basketballs, chairs, hoardings, boards, money bags, chickens etc.

The game is physics based game app, and follows the laws of gravity, wind force, and projectile. Based on these simple rules, all you have to do is aim and fire. Though, you can’t see your enemy while firing, but before firing the app will show you your opponent, so that you can guess the correct angle and power. If you managed to get to the right angle and power, then you’ll hit your enemy. As a result you’ll get scores on the basis of where you hit the enemy, and with how much weight and power. Every single hit gives you points and deduct equivalent life from the enemy, making his life meter low on life. 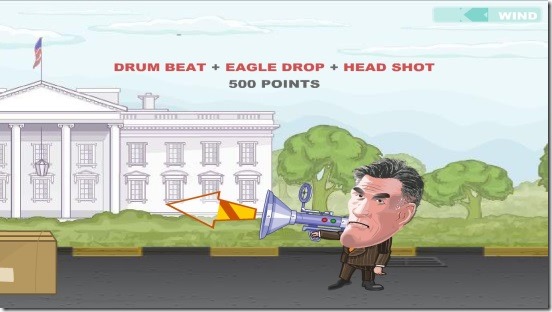 So the game’s objective is to make the enemies life meter empty. So that, you can be the last man standing. Click-drag to get to the right angle and power, then release the mouse to fire. There’s only one level in the game, which is a set back for the game. But the gameplay is good. Like I mentioned above you’ll get different bonus stuff during the gameplay, which you can throw on the opponent. All you have to do is grab them before your enemy does. And the way of getting them is hit them with the default ammo (basketball), and you can use them in the next turn.

The game is played turn by turn. That, you’ll start the game first, then the opponent (that is the computer) will play next, then you’ll get your turn. Good thing is the app gives you option to choose whether to play as Obama or Romney. The app also has a world leaderboard, which shows the top 20 scores of all time. So, you can also play to get the topmost position in the list. 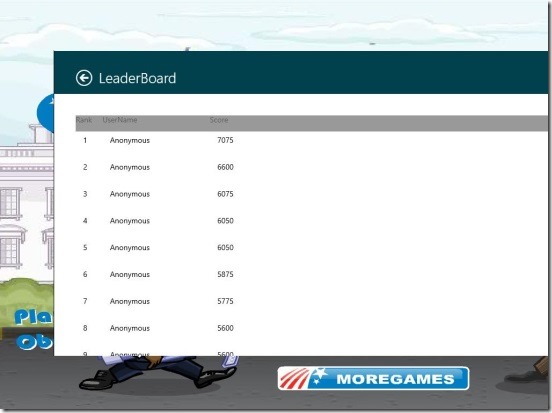 Here are some other good Windows 8 game apps for you: Worms vs Bees, The Slunchies, andJudge Dredd vs. Zombies.

Obama VS Romney is good Windows game app. It’s simple, easy, and funny. No doubt it does needs more improvements, like including more levels and some more cool stuff to throw in the game. Also the simulations can be improved. Still, the game is a good start and good medium to kill some free time.

Get Obama VS Romney here.