WWE, is the Windows 8 official WWE app. That is, it’s a hub, from where you can get all the latest and hottest news, photos, and videos from the WWE world. Since it’s the official WWE app for Windows 8, so whatever news and videos you get from this app is true and reliable. The app brings the latest news of the WWE and WWE superstars both inside as well as outside the ring. Plus, it also tells you about the latest buzz related to the upcoming special matches, like Summer slam, King of the ring, WrestleMania etc., and the rivalries between the superstars. The app consists of a huge database of the WWE superstars from the past to the present, which helps you in knowing the latest that’s going on with them; which you won’t usually see in TV etc. and get to know your favorite superstars a little more. You can also put all your favorite superstars in a separate group called My Universe, so that you can filter and get the latest from your favorite WWE stars right from the Start screen. Plus at the end, you can also see the top 25 Superstars of present time that are ruling in the leaderboard. 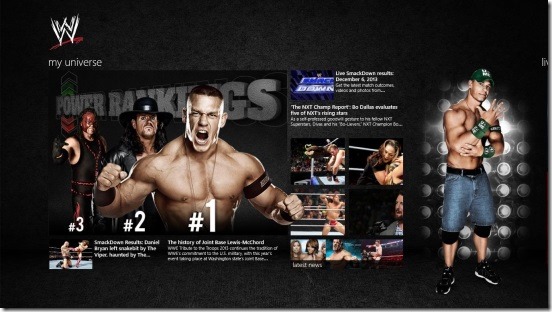 The app certainly is a good medium to stay updated with the WWE world, and the latest-hottest buzz and actions, both inside the ring and outside the ring. The app brings you the most recent news from the WWE world, and that covers the latest Smackdown and Raw episodes and the other special shows. The app doesn’t limits itself just to these two but also covers the news from NXT, ECW etc. as well. So, if you are a big fan of WWE and WWE superstars like John Cena, Randy Orton, Daniel Brown, The Undertaker, Hit man, Triple H, Shawn Michel and so on, then this is the app for you. 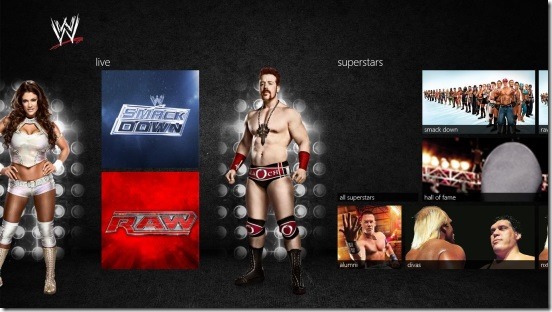 The app has very interesting and eye-catching UI, that will grab your attention, the very first time. Interacting with the app is also very fun and intuitive. It gives you a touch feel even when you are using a non touch device. However a little correction is needed in Superstar section in the main screen because the photos in the screen doesn’t actually goes with the name of the buttons that’s written in the screen; specially the Divas and NXT buttons and their respective photos. Otherwise, everything in the app is correct and works fine. 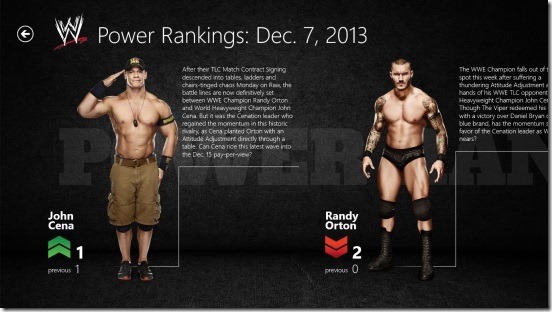 A really cool feature that I liked in this Windows 8 official WWE app, is that  you can see which Superstars are leading the world leaderboard. The app shows top 25 WWE superstars of current time, and their last week rankings. And if you click on the Superstar on this screen, it will tell you a brief description of what happened with that superstar inside the ring, the current week. 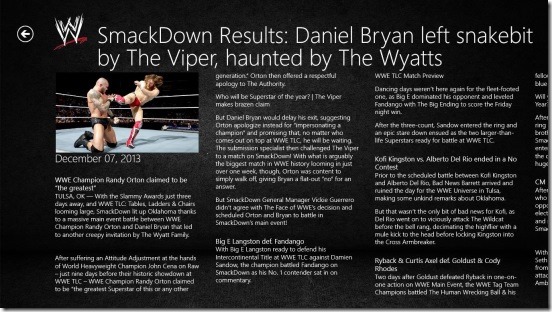 Clicking on the Latest news section in the main screen opens up the news section in the next screen, which lists down all the hottest news from SMACKDOWN, RAW, ECW, NXT, and OVW etc. in tiles format. Simply click on a news to start reading it. And a cool thing about reading news is you can also share them using Windows 8 Share Charm. 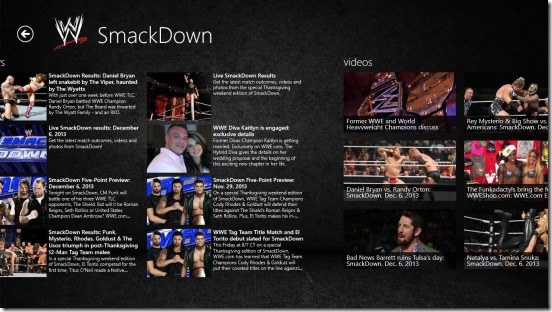 The main screen of the app also consists of a Live section, which basically consists of two biggest WWE shows: SMACKDOWN and RAW. Clicking on which opens it’s respective screen giving the latest news from that show, and the highlight videos and photos of the show in the current week episode. The videos get played in full screen mode. And has simple playback control buttons. All the videos and photos are in high-definition and are the best shots of the matches. You can share every news, video, and photo using Windows 8 Share Charm. 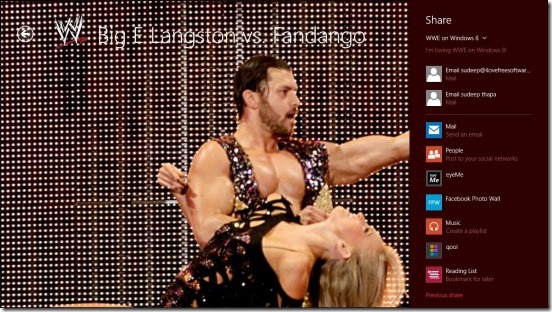 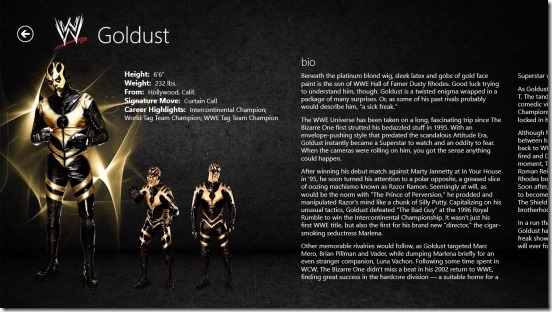 WWE sure is a good Windows 8 version of the official WWE app. Though, there were some reviews stating the app doesn’t gives latest news in Windows Store, but all I found in the app were latest and updated. Besides that it’s fast, functional and provides a really good medium to stay updated with WWE news. However the app does needs an internet with a really good speed. All in all a good free app to install in your Windows 8 devices.