Worms vs Bees, is a free Windows 8 shooting game app. Well the game is a simple but addictive Windows 8 lightweight game app, where you have to move and shoot the worms, so that you can protect your honeycomb. You’ll be the only fighter who is fighting against a huge army of worms, which come from every corner of the screen, trying to gulp you. So it’s your job to protect yourself and the honeycomb for as long as possible, by continuously moving around the playing area and killing every single worm. The app will provide you with unlimited ammunition, that is acorns and special honey bomb, that kills every worm around you. 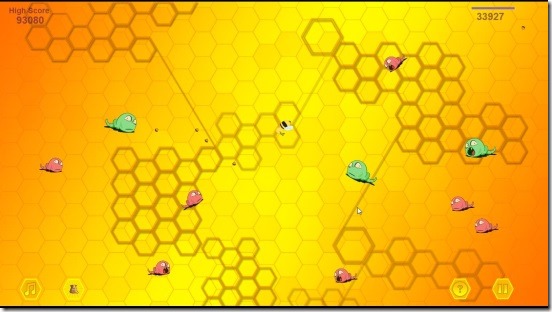 The gameplay of this game is what makes this Windows 8 shooting game app a really fun and addictive game app. It’s very simple but extremely fast paced game. It does sounds like too simple. But that’s not the case, because, as the game advances, the game starts getting more difficult. So, the longer you stay alive in the game, the more aggressive the worms will get and the more time it will take to kill the worms. These are the facts that makes it fun and challenging game.

To help you, the game also provides you with a really awesome firepower called Honey Bomb, which you can fire by pressing H key. This firepower is cool because it fires the honey bombs all around you. It starts from you being at the center and spreads in a ring fashion, killing all the worms in the area surrounding you. Now, thats a pretty kick ass firepower. 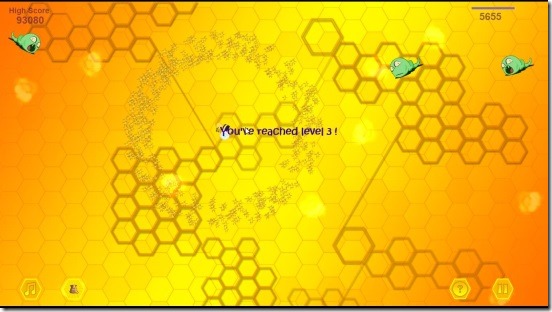 Besides that, you can also use the normal acorns to kill these worms. Use the spacebar or the left mouse click to fire acorns. Well, the best way of using the acorns is to use both the keys, that is spacebar and left mouse click together at the same time. This increases the rate of firing acorns, making it easier to kill the worms.

The other good thing in this Windows 8 shooting game app is you can move your character (bee), rather than just staying glued to one place. Now, that’s a pretty cool feature, because there are some similar shooting games in Windows Store but in some of them the main character can’t move at all. Use the keyboard arrow keys to move the bee around the playing area. You can also use the mouse to move the bee, it automatically follows your cursor movements. 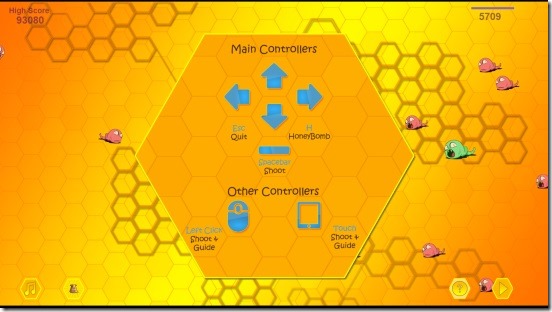 Since the objective of the game is to stay alive as long as you can, so in a way the game continues to infinite levels. With each gameplay, you’ll get a life meter on the top right corner. This increases every time you kill a worm.

There are different types of funny looking worms, carrying different points, and different death hits. If any worm manages to gulp (touch) you, your life meter decreases. So, what you have to do is keep killing your enemies and raise your life meter and score. The app saves your all time best score, and shows it to you all the time, reminding you of your goal to beat. 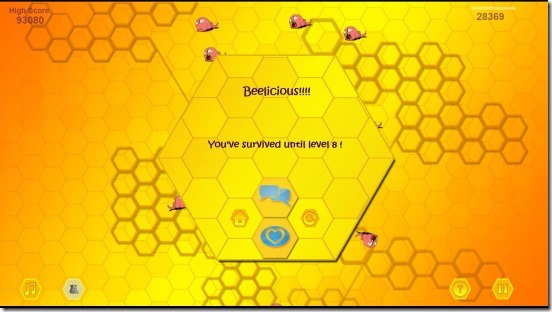 Without any second thoughts, Worms vs Bees is a good Windows 8 shooting game app. It’s functional, fast, easy, and challenging. Above all, it has a really good and fun gameplay, which makes it good enough for every users alike. All in all a good free Windows 8 game app.