Here is a tutorial that explains how to install Firefox on Windows 8 as a native app.

Firefox by Mozilla is a well known name in the Internet Browser World. It offers amazing speeds for browsing the internet. The Firefox browser has been available for Windows 8 as a desktop app for a long time now, but many users want to use Firefox as a metro UI app as well. Although not available from the Windows app store, there is a way to install the preview build of the Firefox Metro App on your Windows 8. Do note that this app is in the Nightly build (stable alpha) phase, and although it does not crash on Windows 8 machines, it may tend to give some slight issues. Installing the Windows 8 app of Firefox is not very straightforward, and hence, I have decided to make an easy to follow tutorial for you, our dear readers!

Tutorial to Install Firefox on Windows 8:

Before you continue with this tutorial, make sure that you Uninstall all mozilla software from your Windows 8 machine. The software may include, Mozilla Firefox, Mozilla Thunderbird, Mozilla Software updater etc. To uninstall, simply go to Control Panel> Programs and Features> Uninstall a Program, and select and uninstall the Mozilla products. When you are done with the above steps, proceed with the below tutorial. 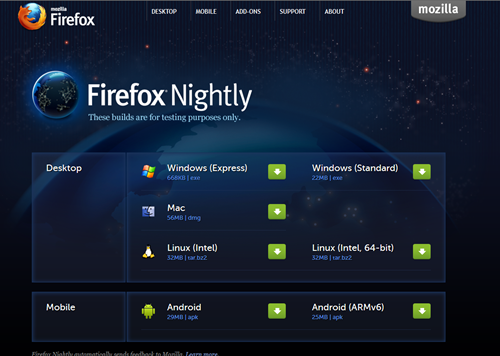 Step 2: Run the installer. When the installation is complete, fire up Nightly. The Firefox nightly icon is Blue Globe icon, and instead of Firefox, the Text label will read Nightly. The Nightly icon should be visible on the desktop. When you will open Nightly, it will ask you if you want to use it as your default browser (see screenshot below).

Select Yes in the above box that pops up. Now, you should get another pop up from Windows 8, that “How do you want to open this type of link (http)?”. Select Nightly from the list that opens up. (see screenshot below)

Step 3: Now, you should be able to see the Nightly app in your start screen. (see screenshot below)

Step 4: Open up Nightly from the Start Screen. You will see a Metro Interface like the below screenshot. 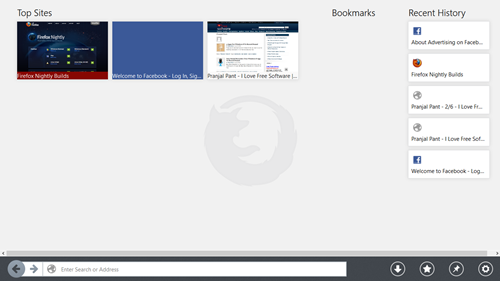 In the above window, you can simply type the web address in the bar at the bottom and begin browsing the web. 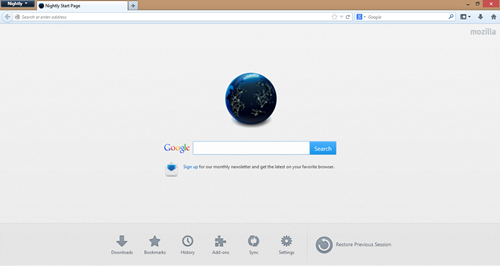 This is all you need to know to install Firefox Metro on your Windows 8 machine.

Nightly is an amazing Metro UI app for Windows 8 which is very smooth, and runs with no lags whatsoever. This app makes for a good replacement of the standard desktop browser that you are accustomed to using, and although it lacks a few features as of now, we are sure that these features will be added gradually to the app, as the app is in its alpha release as of now.

The app is very stable, and you can download it for Windows 8 for free.

Get Firefox Nightly app for Windows 8